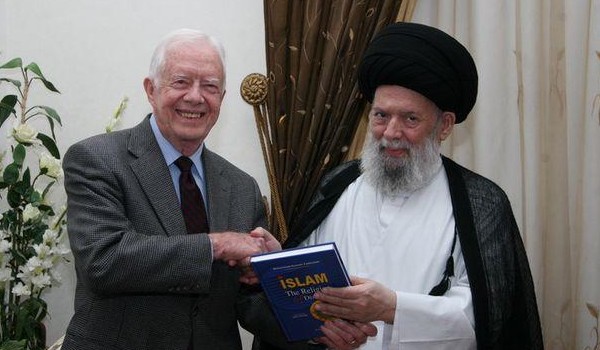 Consider this: When Jimmy Carter visited Grand Ayatollah Mohammed Hussein Fadlallah in Beirut just over a year ago, protection for the former US president was provided not only by the Secret Service but also Hezbollah’s own security personnel, both of whom feared that Carter might be assassinated by Israel’s Mossad!

Fourteen years earlier Fadlallah escaped an assassination attempt — that time it was a CIA covert operation in which 83 people died and 283 were injured.

The two incidents highlight the subjective nature of “terrorism” — a term used in the contemporary era to refer almost exclusively to violence carried out by non-government entities, yet a term that could just as reasonably be used to describe actions by the two governments that most loudly trumpet the threat from terrorism: Israel and the United States.

With that in mind, let’s consider once more the life of a man who the US government still designates as a “terrorist”: Grand Ayatollah Mohammed Hussein Fadlallah.

Rami G Khouri (who in confessionally fragmented Lebanon, it should be noted, is a Palestinian Arab Christian) writes:

Grand Ayatollah Mohammed Hussein Fadlallah, Lebanon’s most influential Shiite Muslim leader who died in Beirut this past weekend, was a marja, or a source of emulation for Shiites, during his lifetime — just about the highest achievement a human being can attain in this world.

It would be doing Fadlallah a disservice only or mainly to see him as a gifted Shiite religious figure. His great achievement, I believe, was to provide a living example of the combination of the best qualities that any Arab or Muslim could aspire to in this era of great mediocrity, corruption, materialism, mindless violence and abuse of power throughout much of the Arab world.

Fadlallah was — as Americans are fond of saying of sports figures who are talented, smart, humble, generous and personable — “the complete package.” He stood head and shoulders above his contemporaries in Lebanon and most of the region because he combined several qualities noteworthy each on its own: profound theological and academic learning; an analytical and active mind; extensive social activism to assist the needy; nationalist politics to protect one’s sovereignty and support Arab causes, like Palestine; a commitment to resisting and fighting foreign aggression and occupation; political modernism that appreciated pluralistic and accountable governance; a rejection of one-man rule in favor of collective leadership based on consultation and consensus; a deep commitment to dialogue and solidarity with those of different faiths, ideologies or ethnicities; a progressive sense of the rights of women and youth; humility of spirit that prevented him from assuming public or official positions; and — I suspect from reading some of his writings, as I never met him — a twinkle in his eye and generosity in his heart that accepted the need to enjoy life, without hurting others or blaspheming core religious dictates.

It is no surprise, therefore, that Fadlallah had followers in many parts of the world, far beyond his native Lebanon or Iraq where he grew up. A key reason for his charisma and a source of emulation was his philosophy of the obligation of the weak and oppressed to struggle and if necessary to fight for their humanity, liberation, dignity and rights. By the examples he set in his own life and behavior — education, contemplation, self-assertion, honesty, generosity toward the needy — he showed others how they could aspire to achieve their full potential as human beings, individually and collectively.

His was a very Shiite life story, given that the Shiites of Lebanon in just two generations — from the 1960s to the 2000s — transformed themselves from the abused and subjugated downtrodden of Lebanese society into the single most powerful group in the country. His rise to prominence coincided with and partly inspired this epic transformation, that now sees Hizbullah as the dominant Shiite organization in the political, social and military fields. This change in status is also controversial for many other Lebanese who distrust Hizbullah and see it as an Iranian- and Syrian-manipulated menace to Lebanon’s collective sovereignty, identity and stability.

Fadlallah’s life story is so noteworthy because it transcends the Hizbullah-dominated dimensions of Lebanese Shiism. There was a convergence of sentiments and struggle between the man and the nascent movement and its forerunners, for a while, in the 1970s and 1980s. Yet he went beyond Hizbullah’s focus on resistance, to embrace and develop the totality of human, communal and national dimensions that he believed was the obligation of any Muslim and any human being.

His recipe was simple but effective, for those who could apply it: Read. Study. Discuss. Debate. Question. Learn. Work hard. Be generous. Respect others, especially those who are different from you. Stand up for your rights. Use your power to defend your people and country. And, always, remain humble.

Perhaps his greatest feat — as is the case with others of his ilk who joined God’s world with ours, like Martin Luther King, Jr., Pope John Paul II, or Bishop Desmond Tutu — was his ability to make Islamic religious ethics a springboard for personal and collective human betterment, rather than an isolated obsession or source of autocratic fanaticism.

The learned man moved back and forth from his books to his neighborhood, from lofty divine inspirations to mundane social, economic and political problems that needed resolution — in this lifetime, not the one to come. Faith, in his view and life practice, gave you the power and confidence to fix the flaws and injustices of our world, rather than only to bemoan and endure them. That, in the end, was not just a holy man, but a very modern man — a model Lebanese, Arab and Muslim who was rightly respected and emulated by many in his lifetime, because he showed us what we could become if we put our mind to it.

4 thoughts on “A source of emulation”