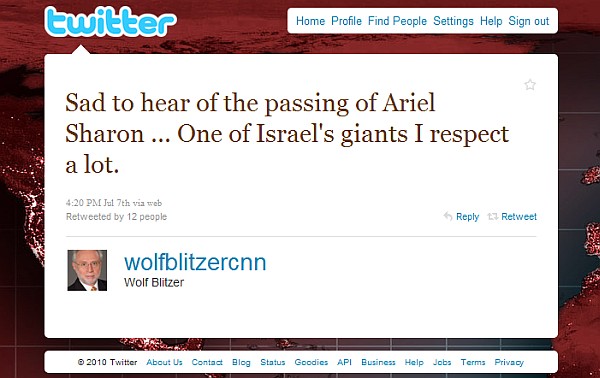 No, Ariel Sharon has not just died. But when he does, will Wolf Blitzer lose his job if he writes a tweet like the one above (a fake of course, created by yours truly)?

Certainly not, because as Glenn Greenwald correctly noted yesterday: “The speech prohibitions and thought crimes on the Middle East all run in one direction: to enforce ‘pro-Israel’ orthodoxies.”

Then again, Blitzer (who was at AIPAC and the Jerusalem Post before moving to CNN) will have no need to let his Zionist colors fly within the confines of a tweet. He’ll be content to report gushing praise for the former Israeli prime minister from President Obama or President Whoever, the day Sharon dies — a day when little if anything with be said in the Washington political/media establishment about Sharon’s personal responsibility in the slaughter of as many as 2,000 Palestinians killed in the Sabra and Shátila massacre in Beirut in 1982.

CNN’s Octavia Nasr, on the other hand, has been found guilty of praising Sayyid Mohammed Hussein Fadlallah, a man whose stature Sharon could never match — and for that offense, as has now been widely reported, the Lebanese-born journalist lost her job.

As Frances Guy, Britain’s ambassador to Lebanon, wrote in a blog post soon after Fadlallah’s death (a post she later removed “after mature consideration” according to the British Foreign Office): 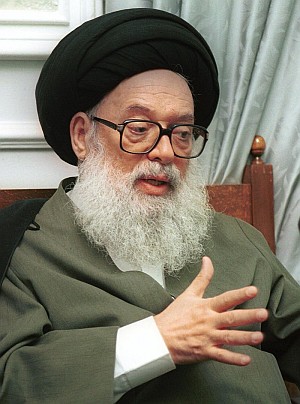 When you visited him you could be sure of a real debate, a respectful argument and you knew you would leave his presence feeling a better person. That for me is the real effect of a true man of religion; leaving an impact on everyone he meets, no matter what their faith. Sheikh Fadlallah passed away yesterday. Lebanon is a lesser place the day after but his absence will be felt well beyond Lebanon’s shores. I remember well when I was nominated ambassador to Beirut, a muslim acquaintance sought me out to tell me how lucky I was because I would get a chance to meet Sheikh Fadlallah. Truly he was right. If I was sad to hear the news I know other peoples’ lives will be truly blighted. The world needs more men like him willing to reach out across faiths, acknowledging the reality of the modern world and daring to confront old constraints. May he rest in peace.

So why did CNN’s Nasr lose her job for expressing sadness at Fadlallah’s death? After all, his name is not a household word outside the Middle East.

Nasr’s mistake may well not have been that she expressed appreciation for this particular eminent Shia cleric but that she referred to him as one of “Hezbollah’s giants.”

So here’s one of the many ironies in this incident: while the Israel lobby controls the mainstream media with a well-oiled censorship machine that would be the envy of Joseph Goebbels, freedoms that journalists are being terrorized to abandon are nevertheless being exercised inside the US military. At CNN Hezbollah cannot be mentioned without also being demonized, yet at CENTCOM there are those calling for the powerful militia to be brought in from the cold. As Mark Perry revealed last month, a recent Red Team report called for the integration of Hezbollah into the Lebanese Armed Forces.

As for Sayyid Fadlallah himself, Lebanon’s prime minister, Saad Hariri — an Arab leader of the variety much-loved in the West — praised the cleric as “a voice of moderation and an advocate of unity.”

One of the reasons Fadlallah has been condemned by successive US governments is because of his alleged connections to the 1983 bombing in Beirut that killed 241 American servicemen, yet Robert Baer, who was himself a CIA field officer in Beirut, says: “there never has been a shred of evidence that Fadlallah was responsible for the Marine bombing, other than his preaching against foreign occupation.”

In his New York Times obituary, Fadlallah’s “extremism” was supposedly evident when in 2002 he told the Daily Telegraph:

[The Palestinians] have had their land stolen, their families killed, their homes destroyed, and the Israelis are using weapons, such as the F16 aircraft, which are meant only for major wars. There is no other way for the Palestinians to push back those mountains, apart from martyrdom operations.

Which reminds me of a line I came across on Facebook recently: a terrorist is someone with a bomb but no air force.

Fadlallah was also guilty of questioning the Holocaust — a commonplace attitude in the Middle East that must surely perplex many in the West. Even so, that attitude is, I suspect, much more one of sentiment than historical perspective. The Holocaust, as a justification for the dispossession and slaughter of Palestinians, has as much relevance as do the childhood traumas of a murderer when recounted to the murder victim’s family. This is context that does nothing to color the crime. Indeed, Holocaust doubt, thus provoked, can be seen as a direct effect of Holocaust exploitation.

Perhaps Sayyid Fadlallah is best remembered not through a tweet or a State department classification but in his own words:

Throughout my life, I have always supported the human being in his humanism and [I have supported] the oppressed… I think it is the person’s right to live his freedom… and [it is his right] to face the injustice imposed on him by revolting against it, using his practical, realistic and available means to end the oppressor’s injustice toward him, whether it is an individual, a community, a nation, or a state; whether male or female. God created the people free; thus no one has the right to enslave people and no one has the right to enslave himself for others. Imam Ali said “do not be a slave of others, as God created you free.”

10 thoughts on “When honesty gets dangerous, liars succeed”