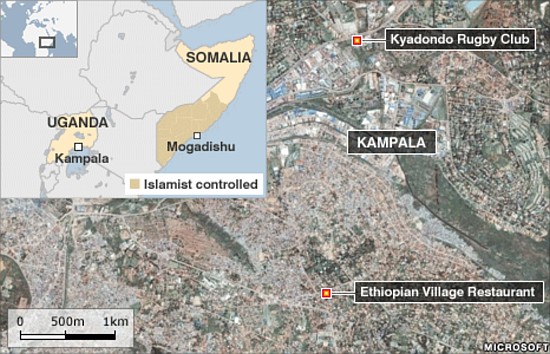 Bombings in Uganda that killed 74 football fans watching the World Cup final between Spain and the Netherlands have been attributed to Somalia’s al-Shabab militia. Earlier, the Washington Post described the way the sport and its fans were being targeted inside Somalia:

Al-Shabab, a hard-line Islamic militia that is waging a campaign of terror across Somalia, has banned playing soccer in many areas it controls. The al-Qaeda-linked militia, along with Hezb-i-Islam, a rival extremist group, prohibited broadcasts of the World Cup, describing the sport as “a satanic act” that corrupts Muslims.

The militants have brutally targeted politicians, clerics and peacekeepers — anyone who has challenged their extreme views. But in the past month, they have killed at least five people and arrested scores more for watching the World Cup. They have detained and tortured local soccer club owners on charges of misguiding youth.

So do Sunday’s bombings represent an escalation in a bloody fight against a satanic sport? Probably not.

At The Atlantic, Max Fisher considers possible reasons for the attacks that have no ideological basis.

There are two likely explanations for this act of terrorism, both with dark implications for Somalia and East Africa.

Though militants did not begin using the name al-Shabaab until 2006, they are part of the same Islamist insurgency that has plagued, and at times partially ruled, Somalia since the 1990s. Al-Shabaab is often compared to al-Qaeda, but the two groups have little in common. While both are violently Islamist, only al-Qaeda is ideology-driven, espouses global ambitions, and a has history of terrorism simply for the sake of killing. Al-Shabaab seeks only to rule Somalia and to impose an extreme form of Islamic law. The group has long privileged its fight for control of Somalia over ideology. As many have pointed out, the attack on Uganda makes sense as part of al-Shabaab’s fight against the African Union forces, to which Uganda contributes troops. Only days earlier, the East African block of the African Union voted to increase its peacekeeping force, which seeks to expel al-Shabaab from Somalia’s south, from 6,000 to 8,000 troops.

But Uganda’s participation in the African Union force does not fully explain Al-Shabaab’s attack. After all, several countries contribute to the peacekeeping mission. Uganda does not even border Somalia. If al-Shabaab wanted to expand the borders of its territorial control, it would have pushed into Kenya or Ethiopia. If the militant group was simply seeking revenge against the African Union, it would have targeted Ethiopia, the country most responsible for its removal from power in 2006, when it was known as the Islamic Courts Union. Ideologically, Uganda is also an unusual target. Al-Shabaab’s ideology is primarily concerned with fellow Muslims, on whom the group wishes to impose Taliban-like law, but Uganda is over 80 percent Christian.

The decision to bomb civilian gatherings in Kampala was almost certainly tactical. Al-Shabaab is not like the Taliban of 2000, which had secure control of Afghanistan and thus felt comfortable spreading violence and ideology outside the country’s borders. But al-Shabaab is still struggling in Somalia’s ongoing civil war. There are two likely tactical explanations for the attack. The first is that al-Shabaab is feeling increasingly threatened by the African Union force and is desperate to forestall or prevent the planned addition of 2,000 peacekeepers. In that case, this attack was a defensive act. Insurgents typically turn to terrorism when they are no longer able to challenge their opponents on the battlefield. While this may appear to be good news because it would mean that the group is weaker, a threatened al-Shabaab would become a threat to not just southern Somalia but all of East Africa. As Graeme Wood explained in his chronicling of the Lord’s Resistance Army insurgency in the Central African Republic, “the smaller and more resoundingly defeated the rebels are, the more brutally they fight.” This is how insurgencies, which can be negotiated or even reconciled with, become terrorist groups, which do not accept political compromises and can persist for many years. This attack on civilians outside Somalia would not be the last.

The other possibility is that al-Shabaab is stronger than we think and that this attack is the beginning of a push to expand its reach. Al-Shabaab only operates in Somalia’s south. If it feels confident in its control there, it may be planning to assault north into the contested horn of the country or even into the relatively calm Somaliland region in the north, which has been called an “oasis of stability.” This act of terrorism would be al-Shabaab way of opening a new front in a campaign to expel the peacekeepers from the regions al-Shabaab does not yet control. If the insurgency is indeed growing stronger, this would help explain why the African Union felt the need to increase its force strength by one third. It’s difficult to know how long the peacekeepers could hold back al-Shabaab from taking more of the country.