Too secret for the Washington Post to reveal what it is?

It’s out there — but you won’t find out much about it at the Washington Post!

Memos being leaked from government agencies imploring lips to remain sealed; several days of media buzz in anticipation of a blockbuster investigative series…

One of Hollywood’s hottest publicists must surely have been contracted to push the Washington Post‘s sensational Top Secret America.

And what did we get when the bombshell exploded? Investigative reporting fit for the pages of Cosmopolitan. God help American journalism.

This is the big story about the uncontrolled growth of America’s post-9/11 national security industry — indeed an important story, but couldn’t two years of investigation have yielded more substance?

Consider this nugget from Wednesday’s feature on “The secrets next door“:

“In the Washington area, there are 4,000 corporate offices that handle classified information, 25 percent more than last year…”

Twenty-five percent growth in the first year of the Obama administration — that’s a big deal! It must tell us a lot about this administration’s national security philosophy. Or maybe not — maybe all the growth was all in the pipeline and the administration hasn’t figured out how to rein it in.

This is just one of the many statistics that Priest and Arkin toss out and then do nothing to explore. And in this instance it appears to be a purely anecdotal “statistic.” It comes from the supervisor of an industrial security specialist. Justin Walsh spends most of his time up a ladder and this is what Justin’s boss said.

But if the feature articles in the series are a bit lacking in substance, maybe the hard facts are stuffed into the databases the Post has compiled. That’s where we’ll get revelations on a company like Autonomy where the infamous neoconservative warmonger Richard Perle has served as a non-executive director since 2000.

The Post reveals the company has just one government client. Strange?

As far back as 2002, Autonomy was reporting it had “demonstrated its dominance of the Intelligence market by achieving the key infrastructure wins in the arenas of Homeland security and Intelligence systems for over 30 intelligence related and classified organizations in the U.S.” (That comes from the company’s 2002 fourth quarter financial report.) Subsequent company reports indicate that business with the intelligence community has continued to expand for the global leader in creating software for processing unstructured information — one of the core needs in most intelligence analysis. But Top Secret America has nothing to report on this.

OK. The private sector is a labyrinth. How about US government operations? This is where one might hope to learn more about the super secret electronic eavesdropping facility at Sugar Grove.

Sugar Grove, nestled in the mountains of West Virginia, is the location of an NSA facility which forms part of ECHELON, a global system of communications surveillance. More information can be found at the Navy Information Operations Command for the base — that is, if you have no qualms about agreeing to a Department of Defense consent agreement that says the US Government will thereafter have the right to seize your computer at any time! I’m not kidding.

And what do we learn about Sugar Grove in Top Secret America? Virtually nothing. It’s a red dot on the map (see the image at the top of this article).

But here’s the worst thing about Top Secret America: it is journalism that instead of providing in-depth exposure to a major political story will more likely have the effect of inoculating the issue.

While this country needs a wake-up call to the fact that its government is still locked in a Bush era fixation on national security, instead we are being cautioned that the crux of the issue primarily one of size. The national security industry in the US has grown out of control — oh yeah, I saw that report in the Washington Post. Big government. What’s new? 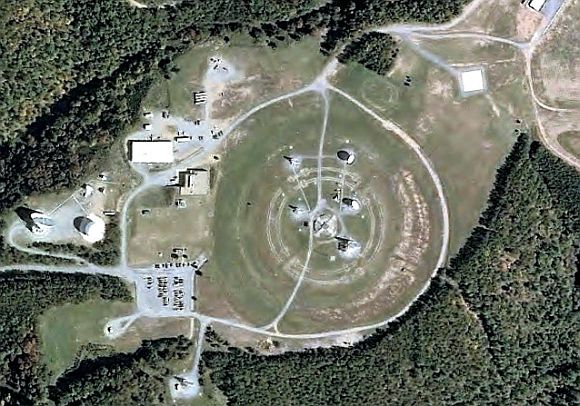