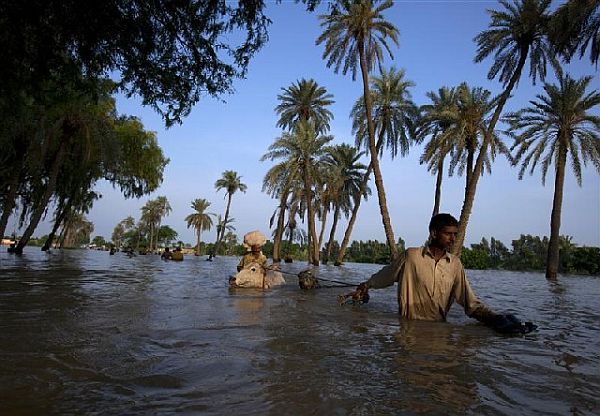 Pakistan’s Foreign Minister Shah Mehmood Qureshi presented the U.N.’s members with a stark challenge: Help Pakistan recover from its most devastating natural disaster in modern history or run the risk of surrendering a key front in the war on terror.

“This disaster has hit us hard at a time, and in areas, where we are in the midst of fighting a war against extremists and terrorists,” Qureshi warned foreign delegates, including U.S. Secretary of State Hillary Rodham Clinton, at a U.N. donor’s conference on the Pakistani flood. “If we fail, it could undermine the hard won gains made by the government in our difficult and painful war against terrorism. We cannot allow this catastrophe to become an opportunity for the terrorists.”

Qureshi provided one of his darkest assessments to date of the political, economic and security costs of Pakistan’s floods, which have placed more than 20 million people in need of assistance, destroyed more than 900,000 homes and created financial losses of over $43 billion. “We are the people that the international community looks towards, as a bulwark against terrorism and extremism,” he said, adding that Pakistan “now looks towards the international community to show a similar determination and humanity in our hour of need.”

“[A] humanitarian disaster of monumental proportions,” says US Secretary of State Hillary Clinton; renewed evidence of the devastating impact of global warming — but what’s the real danger? The threat that should worry all Americans? Terrorism.

This — the word “terrorism” — has become a mind-numbing drug that cuts us off from humanity and even the fate of the planet.

In a gesture presumably designed in part to pacify American fears, the Pakistani government announced today it will clamp down on the relief work of Islamist charities, even though they have responded to the crisis more effectively than the government itself. The move would seem likely to even further alienate a population that already feels abandoned by its own government.

The death toll is much smaller than in past disasters: About 1,600 are believed dead so far. But experts say initial assessments show the scale of damage and human suffering left by torrential monsoon rains over the past three weeks dwarfs the 2004 Indian Ocean tsunami, 2005 Kashmir earthquake, 2008 Cyclone Nargis disaster in Burma, and Jan. 12 earthquake in Haiti — combined.

“What we face in Pakistan today is a natural calamity of unprecedented proportions,” Pakistan’s foreign minister, Makhdoom Shah Mahmood Qureshi, said during a special U.N. session to address the crisis, held here yesterday. “These are the worst monsoon floods in living memory.”

Debate is heating up over what caused the catastrophe, with experts pointing to deforestation, intensive land-use practices or mismanagement of the Indus River as possible causes. But top U.N. and Pakistani government officials are now clearly pointing to climate change as the principal culprit.