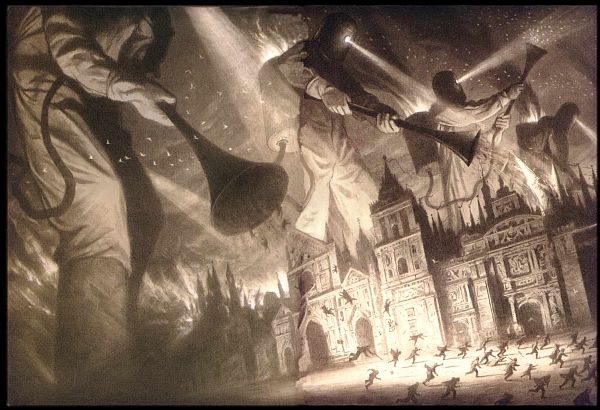 Peter Beinart compares the mood in America with the hysteria that provoked the Palmer Raids in 1919 and the anti-Communist fearmongering of McCarthyism that began in the late 1940s.

Ever since 9/11, according to opinion polls, Republicans have worried more about terrorism than have Democrats. Initially, this fear translated into overwhelming support for military action abroad. But as Republicans (like everyone else) have grown tired and embittered by America’s wars, they have turned their anxiety inward, lured by the same idea that attracted Palmer and the McCarthyites: that America could guarantee its safety on the cheap by ferreting out the real threat, which resides within.

I don’t believe the driving force here is, as Beinart suggests, a desire to guarantee safety on the cheap. Rather, this is about age-old scapegoating-psychology and the political opportunities this crude dynamic opens up.

In a period of economic depression, with high unemployment and a pervasive sense that the nation is heading in the wrong direction, many Americans are experiencing a growing sense of powerlessness. Through scapegoating, they can foster the illusion that they are reclaiming control over our own lives. They can focus their animus on a clearly identifiable enemy — Islam.

In scapegoating, by definition, the enemy must be weaker than those on the attack — which is why even at the height of the financial crisis, popular anger at bankers never became as strong as current Islamophobia. It’s the same as the way a guy who’s treated as a drudge at work then finds his “strength” by abusing his wife.

The more that Muslims can be made to feel like outsiders, the more those who have defined them as other can feel empowered.

Meanwhile, with the emerging visceral sense that American renewal can be delivered by purging this country of its “foreign” elements, a political horizon is opening for conservatives such as Newt Gingrich — a man who has no apparent compunction about harnessing popular power even when delivered from the ugliest source.

Gingrich clearly smells presidential opportunity in rising xenophobia and is channeling this into an attack on President Obama whose “foreignness” derives from his Kenyan ancestry and even the fact that he grew up in Hawaii!

Gingrich claims that Dinesh D’Souza has provided “stunning insight” into Obama, in a Forbes cover story, where the president is characterized as “a Luo tribesman.”

With the Forbes story and now the Gingrich endorsement, the argument that Obama is an infiltrating alien, a deceiving foreigner — and not just any kind of alien, but specifically a Third World alien — has been absorbed almost to the very core of the Republican platform for November 2010.

Rush Limbaugh has been claiming for almost 2 years that President Obama is bent upon “redistribution” and “reparations.” Following D’Souza, Gingrich has now stepped up to suggest that this redistribution is motivated by anti-white racial revenge. If Obama wants to expand health coverage, tighten bank regulation, and create government make-work projects it’s not because he shares the same general outlook on the world as Walter Mondale or Ted Kennedy or so many other liberals, living and dead, all of them white and northern European. No, Obama wants to do what he does because he thinks like an African, and not just any kind of African but (in D’Souza’s phrase) “a Luo tribesman.”

It is to vindicate this African tribal dream that Obama wishes to raise the taxes of upper-income taxpayers and redistribute money away from these meritorious individuals. D’Souza contends that Obama is acting to vindicate his father’s supposed dream of overthrowing the global order and ending the global domination of the white race over other peoples.

If only it were true, the anticolonialist in me facetiously says. This global reordering must surely eventually come, but I have my doubts whether Obama will have much if any role in bringing it about.

Much more significant in the current context is the fact that an event which two years ago was seen as a reflection of America’s political maturity — the election of an African-American president — is now serving as a opportunity for America to regress into some of the ugliest recesses of its past.

7 thoughts on “Scapegoating-psychology and rising xenophobia in America”