Greg Mitchell reports (parts one and two) on the suicide of Spc. Alyssa Peterson, one of the first women soldiers to die in Iraq. She took her own life exactly seven years ago after being reprimanded for showing empathy for Iraqi prisoners who were undergoing interrogation. All records of the techniques being used have been destroyed but there seems little doubt that the Iraqis were being tortured. 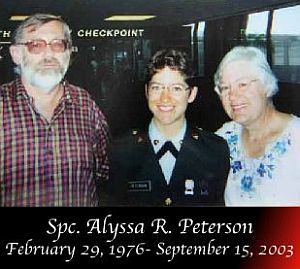 The 27-year-old’s parents didn’t even know their daughter was in Iraq until they were informed of her death. The fact that she committed suicide was concealed by the military for several more years — the most likely reason for the cover-up being that it was Peterson’s unwillingness to participate in torture that drove her to take her own life.

Kayla Williams, a US Army sergeant who served with Peterson, described the impact of participating in interrogations which she could see clearly contravened the Geneva Conventions.

Fellow soldiers, echoing then vice-president Dick Cheney, told the young sergeant that “the old rules no longer applied because this was a different world. This was a new kind of war.” But Williams said: “it really made me feel like we were losing that crucial moral higher ground, and we weren’t behaving in the way that Americans are supposed to behave.”

“It also made me think,” Williams says, “what are we as humans, that we do this to each other? It made me question my humanity and the humanity of all Americans. It was difficult, and to this day I can no longer think I am a really good person and will do the right thing in the right situation.”

As the famous Milgram experiment demonstrated, individuals who choose to do the right thing — especially when that demands defying authority — are usually in a minority. The much more prevalent tendency is a willingness to follow orders and suspend ones own moral judgment — even when that involves participating in torture.

Should Alyssa Peterson have been turned away from the military on the grounds that she was too humane, her conscience too strong, for her to serve in the US Army? She ended up being reprimanded for showing empathy to Iraqi prisoners. As the official investigation of her death revealed: “She said that she did not know how to be two people; she… could not be one person in the cage [where prisoners were apparently tortured] and another outside the wire.”

Empathy is a liability in wartime? Americans need to set aside their humanity when they put on a uniform?

Peterson’s ability to empathize with Iraqi prisoners was no doubt in large part an expression of her character and her humanity, yet to an extent it must also have resulted from the humanizing effect of understanding and speaking Arabic. In spite of the dehumanizing effect of seeing men stripped of their dignity, she must also have been able to see beyond that and through their words seen not mere “terrorist” suspects, but fathers with daughters and sons with parents.

Recognition of humanity is not something we can pick up or discard whenever it seems expedient — whenever cast aside it henceforth becomes increasingly difficult to rediscover.

The choice to cross over to the “dark side” is a choice that may prove impossible to reverse. At 27 Alyssa Peterson seems to have understood that. As far as we can tell, Dick Cheney has not even attempted to find the way back.

6 thoughts on “What would Cheney say?”