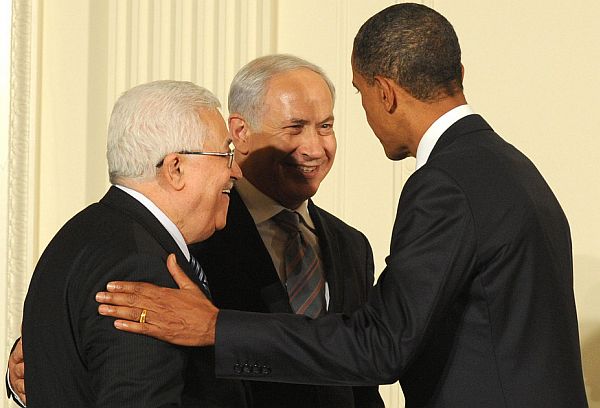 Mark Perry reports on the latest incident in the West Bank which indicates that the Palestinian acting president, Mahmoud Abbas, can now only impose his authority by force.

On Aug. 25, one week prior to the opening of Israeli-Palestinian peace negotiations, a group of Palestinians held a conference in Ramallah to discuss – and protest — President Mahmoud Abbas’s decision to travel to Washington to attend the talks. The Ramallah gathering, to be held at Ramallah’s Protestant Club meeting house, had been meticulously planned by a prominent coalition of political activists that included Palestinian businessmen, acknowledged leaders in Palestinian civil society and respected leaders of Palestinian political parties. “This was to be an open forum, an assembly to debate and discuss,” Munib al-Masri, the founder of the Palestine Forum and one of the meeting’s organizers said in an interview from his home in Nablus. “Our intention was to exercise our right to assemble and debate. Tragically, that’s not what happened.”

As the crowd of attendees (later estimated at between 250-300 people) began to gather at noon on Aug. 25, a group of about 100 non-uniformed officers from the Palestinian General Intelligence Service entered the hall carrying placards featuring Abbas’s picture and shouting pro-Abbas slogans. Across the street, at the headquarters of Al Haq — an independent human rights organization — Shawan Jabarin, the organization’s director (who had been invited to attend the meeting), heard of the commotion and decided to walk to the meeting hall. Jabarin described the scene: “This was going to be a large and important meeting,” he said, “so there were already 200 to 300 people in the hall at noon. But it was clear they wouldn’t be allowed to speak. The security people were shouting slogans, intimidating people. I saw a sign — ‘Stop Supporting Iran.'”

Inside the hall, those disrupting the meeting (Israeli journalist Amira Hess described them in Haaretz as “young men of similar appearance — well-developed muscles, civilian clothes and stern facial expressions”) began to shout down the first speaker, Dr. Mamdouh Al Aker, the director of the Palestinian Independent Commission for Human Rights (PICCR). When Aker asked for a moment of silence “in memory of those who gave their lives for the Palestinian people and the Arab nation” he was whistled down and the crowd of young men began to shout in unison: “With our blood and our souls, we will redeem you, Abu Mazen [Mahmoud Abbas].” The young men, now a phalanx of intimidating muscle and anger, began to push and shove the attendees out of the building. “People were frightened and were pushed outside, shoved out by the security people,” Al Haq’s Jabarin remembers. “It was outrageous, so I directed my staff to take pictures.”

Mustafa Barghouti, the head of the Palestinian National Initiative (a leading and increasingly strong political movement inside Palestine) and one of the most prominent leaders scheduled to speak at the meeting was in the crowd as it was pushed out of the meeting house. He attempted to maintain order and separate the meeting’s attendees from the group disrupting the gathering. “People were pushed into the street,” he remembers, “and that’s when the beatings began. It was very violent. The General Intelligence people were pushing people to the ground.” On the street in front of the Protestant Club, meanwhile, members of the Al Haq staff began to document the incident. “We had a camera, one of my staff members had a camera,” Jabarin says, “and we were trying to take pictures. But my staff member who had the camera was pushed down and the security official attempted to take the camera, to break it. This man was beating him and when one of my other staff members tried to help him, she was pushed to the ground and beaten. They got the camera.”

Standing nearby, Bassam al-Salhi, general secretary of the Palestine Peoples’ Party (and a former candidate for president), also attempted to stop the beatings. “This was mob violence,” he says. “But I thought that if we could somehow move up the street we could stop the confrontations.” Facing continued harassment, the group decided to walk to a nearby park, but were prevented from doing so by the Ramallah police. “They didn’t participate in the violence,” Salhi says of the police, “but they didn’t try to stop it either. Eventually, we had nowhere to go – so people just ran away. They had no choice.” The leaders of the conference, meanwhile, decided to take their protest of the incident to the headquarters of Watan, a local television station. But when they appeared on camera, a vocal group of security officials shouted them down, waving their placards in front of the Watan cameras. Inevitably, perhaps, the continued intimidation of the speakers was successful – and the crowd at Watan dispersed.

Meanwhile a Hamas commander, Iyad As’ad Shelbaya, was killed by the IDF on Thursday after Israeli soldiers claimed he ran towards them in a threatening way and ignored requests to stop. The Ma’an News Agency, however, reports that Shelbaya was shot in bed.

Israeli forces entered the home of a Hamas leader in Tulkarem on Friday morning and shot him three times in the neck and chest before withdrawing, family members said.

Medics at the Thabit Thabit Hospital in Tulkarem confirmed that 38-year-old Iyad As’ad Shelbaya, a known Hamas leader, was dead, killed by three bullets to the neck and chest.

However much these two reports conflict, the one thing about which we can be reasonably sure is that Shelbaya was not carrying a weapon — had he been armed there’s no question that the IDF would have highlighted that detail.

As for their claim that the incident is now being investigated, it’s also reasonable to assume that the investigation won’t reveal anything. As a B’Tselem report revealed this week, the decision by Israeli authorities to regard the West Bank as an area of armed conflict ever since the second intifada began in 2000, “effectively grants immunity to soldiers and officers, with the result that soldiers who kill Palestinians not taking part in hostilities are almost never held accountable for their misdeeds.”

There is very little patience in Gaza for this latest set of talks. They are not only being conducted without a national consensus by what is broadly considered an illegitimate government, but they also completely marginalise the Gaza Strip and overlook the blockade and asphyxiation it has suffered for more than four years.

“When people started to talk about negotiations and going back to the peace process and all, I thought, wait a minute, who took our opinion before going there?” said Ola Anan, 25, a computer engineer from Gaza City. “I mean, Mahmoud Abbas is now a president who’s out of his presidential term. So in whose name is he talking? In the name of Palestinians? I don’t think so.”

Abu el-Abed, a 30-year-old fisherman who sells crabs in the coastal Gaza enclave of Mawasi said: “We hear about the negotiations on television, but we don’t see them reflected on the ground. They’re not feasible. Gaza’s completely marginalised as far as negotiations go. There’s no electricity, there’s no water. There’s no movement. Living expenses are high. And the borders are all closed.”

Nabulsi, like many others here, feels the negotiations are farcical given the fractured nature of the Palestinian leadership, but also given the fact that most consider Abbas’s government illegitimate and his term expired.

As direct talks between the Israelis and Palestinians drag on in Jerusalem, it should not surprise anyone that militants in the Gaza Strip have stepped up their rocket and mortar attacks into southern Israel. Neither should it surprise anyone that the Israeli government is holding Hamas, which has ruled Gaza since seizing control of it in 2007, responsible for the attacks, accusing the group of trying to derail the peace process.

What is surprising, however, is that it may not be Hamas who is responsible for most of the rockets that have recently been launched into Israel. Rather, a group of Palestinian militants connected to al Qaeda has been repeatedly staging attacks against Israeli targets over the last year as a means of challenging Hamas’s rule over Gaza.

A civil war is brewing in the Gaza Strip between Hamas and a new crop of more radical militant groups like Jaish al-Umma, Ansar al-Sunna, and Jund Ansar Allah, who believe Hamas is not fighting the “Jewish enemy” as aggressively as it should be. According to the Economist, these Palestinian militants have been heavily influenced by time spent in Saudi Arabia, where they apparently absorbed the Kingdom’s ultra-orthodox (sometimes called “Salafist”) brand of Islam — a particularly conservative interpretation of Islam that, until recently, had not taken root in the Palestinian territories.

A spokesman for Jaish al-Umma says his group’s purpose is “to awaken the Islamic nation from the backwardness and the ignorance the tyrant regimes in Islamic countries have caused, and to free the Muslims from the despots.”

Although the leaders of this new movement tend to be doctors and university professors, they draw their rank and file membership from Hamas militants who have grown disenchanted with the group’s attempt to moderate its ideology and accommodate Israeli demands. Unlike Hamas, which has diligently kept its distance from al Qaeda and openly rejected its global ideology, many of these so-called “Salafist” groups are fervent supporters of al Qaeda, and some have referred to Osama bin Laden as their “righteous shepherd” (though a few continue to preach loyalty to the president of the Palestinian Authority, Mahmoud Abbas).

7 thoughts on “Who does Mahmoud Abbas represent?”