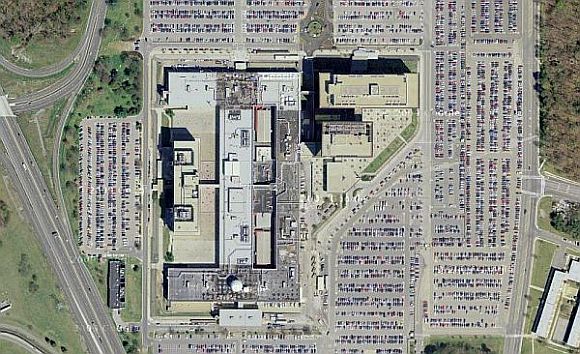 At the New York Times, Scott Shane divulges a national security secret: the National Security Agency (shown in the Google Earth image above) is known by the nickname the Fort. I guess you’d call that the definition of hiding in plain sight since the NSA is located in Fort Meade.

Apparently anyone in the locality could tell you the NSA headquarters is known as the Fort and Shane would not know that that’s supposed to be a secret had he not obtained a copy of a banned book available on eBay.

[T]hat nickname is one of hundreds of supposed secrets Pentagon reviewers blacked out in the new, censored edition of an intelligence officer’s Afghan war memoir. The Defense Department is buying and destroying the entire uncensored first printing of “Operation Dark Heart,” by Anthony Shaffer, a lieutenant colonel in the Army Reserve and former Defense Intelligence Agency officer, in the name of protecting national security.

Another supposed secret removed from the second printing: the location of the Central Intelligence Agency’s training facility — Camp Peary, Va., a fact discoverable from Wikipedia. And the name and abbreviation of the Iranian Revolutionary Guard Corps, routinely mentioned in news articles. And the fact that Sigint means “signals intelligence.”

Not only did the Pentagon black out Colonel Shaffer’s cover name in Afghanistan, Chris Stryker, it deleted the source of his pseudonym: the name of John Wayne’s character in the 1949 movie “The Sands of Iwo Jima.”

The redactions offer a rare glimpse behind the bureaucratic veil that cloaks information the government considers too important for public airing.

The New York Times is generous enough to provide a kind of Wikileaks teaser — a single page of the redacted and unredacted book. 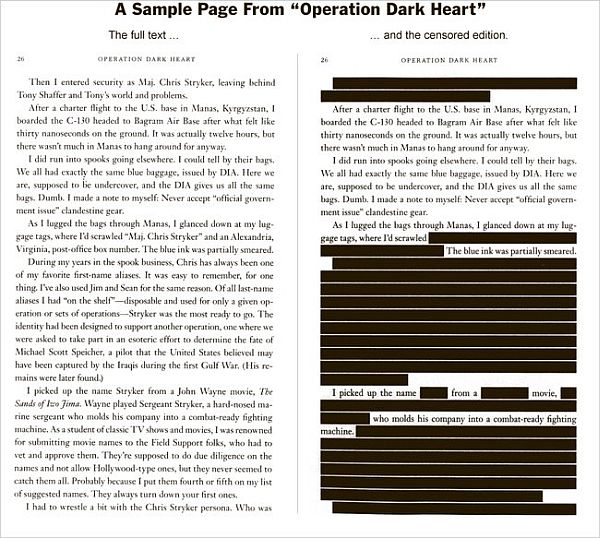 Was it out of deference to St Martin’s Press or the Pentagon that the Times refrained from divulging more of the redactions?

And was the NSA so “liberal” in its use of redaction because they want to keep secret the criteria they use for defining secrecy, or because when it comes to secrecy, government officials in the post 9/11 era know that no one ever gets fired for over-classification?