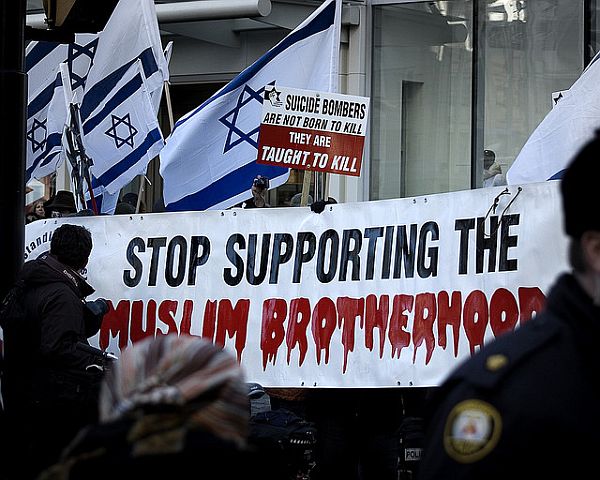 Frank Gaffney’s Center for Security Policy, in a report released last week, breathlessly warned that: “real progress [is] being made by the Muslim Brotherhood in insinuating shariah into the very heartland of America through stealthy means.”

Nathan J Brown knows a lot more about the Islamist organization than do the anti-shariah crusaders, and he says the international Muslim Brotherhood is “a group of loosely linked, ideologically similar movements that recognize each other, swap stories and experiences in occasional meetings, and happily subscribe to a formally international ideology without giving it much priority.”

[A]wareness of Islamist movements in the West has lead to some dark talk of an international Brotherhood that serves as a cover for all sorts of missionary, political, and even violent activity. From a solid core in the Arab world, the Brotherhood’s tentacles are said to be reaching out from Oslo to Oklahoma City.

Second, the international organization is not only sluggish, it is also Egyptian dominated. Its leader is always an Egyptian and Egyptian Brotherhood members have scoffed at the idea that a non-Egyptian might be selected. Badi’s election was approved by the international organization, but there was some grumbling about the rubber-stamp nature of the process. Most members do accept that the “mother organization” will inevitably have a leading role, but many also find the Egyptian leaders far more interested in Egyptian than international affairs. Egypt’s harsh security climate also hampers its leaders from becoming more active internationally — many Egyptian leaders cannot travel outside their country.

Finally, various chapters of the Muslim Brotherhood have developed an ethos of mutual deference: they increasingly hold fast to the idea that each chapter should be free to react as it sees fit to local conditions. The various chapters do consult each other, but they are free to reject the advice they receive. The Iraqi Islamic Party participated in a political process sponsored by the United States at a time when Jordan’s Muslim Brotherhood refused contact with American officials because of the country’s occupation of Iraq. Aware of the conflicting stances, leaders of both organizations simply agreed to disagree. Hamas was advised by both Jordanian and Egyptian leaders not to try too hard in the 2006 parliamentary elections. “Participation, not domination” (that is, run but do not win) was the formula suggested to them. They listened to the first half of the message (they ran), but not the second (they won). Unlike their Jordanian and Egyptian comrades who only contest a minority of seats, they submitted a complete slate of candidates for parliamentary seats, enabling their surprising (and in the eyes of some Brotherhood leaders elsewhere) ill-advised victory.