Ever since — with much fanfare in Washington — Israel entered into direct talks with the Palestinian team led by acting president Mahmoud Abbas, the Palestinians have insisted that the continuation of the talks would hinge on a continuation of a nominal settlement freeze due to expire on Sunday. Thus far, Israeli Prime Minister Netanyahu has yet to agree to extend the so-called freeze. (With East Jerusalem excluded and work continuing on 3,000 housing units, it was never an actual freeze.)

The New York Times now reports that the Israelis want to cut a deal: that the US should release the infamous Israeli spy Jonathan Pollard in exchange for a three-month extension of the freeze. An Israel Army Radio report is cited which “said a private individual had been asked to try to gauge the potential of such an offer ‘discreetly and informally’ with American officials.”

Why are the Israelis being so coy as to require the use of an intermediary at a time when Israeli and US officials are in constant direct communication?

Since 1987, Pollard, a US citizen who became an Israeli citizen in 1995, has been serving life in prison for spying on behalf of Israel. Israeli leaders and the Israel lobby in the US have subsequently engaged in a long-running campaign for his release. In 2007 Benjamin Netanyahu made a campaign pledge that if he became prime minister he would seek Pollard’s release.

At the end of the nineties there were hints, Israelis claimed, that Bill Clinton, at a critical juncture during Israeli-Palestinian peace negotiations, might be willing to yield to their requests. The US intelligence community immediately voiced strong objections.

As Seymour Hersh reported in 1999:

The President’s willingness to consider clemency for Pollard so upset the intelligence community that its leaders took an unusual step: they began to go public. In early December, four retired admirals who had served as director of Naval Intelligence circulated an article, eventually published in the Washington Post, in which they argued that Pollard’s release would be “irresponsible” and a victory for what they depicted as a “clever public relations campaign.” Since then, sensitive details about the secrets Pollard gave away have been made public by CBS and NBC.

In the course of my own interviews for this account, the officials who knew the most about Jonathan Pollard made it clear that they were talking because they no longer had confidence that President Clinton would do what they believed was the right thing — keep Pollard locked up. Pollard, these officials told me, had done far more damage to American national security than was ever made known to the public; for example, he betrayed elements of four major American intelligence systems. In their eyes, there is no distinction between betraying secrets to an enemy, such as the Soviet Union, and betraying secrets to an ally.

Officials are loath to talk publicly about it, but spying on allies is a fact of life: the United States invests billions annually to monitor the communications of its friends. Many American embassies around the world contain a clandestine intercept facility that targets diplomatic communications. The goal is not only to know the military and diplomatic plans of our friends but also to learn what intelligence they may be receiving and with whom they share information. “If a friendly state has friends that we don’t see as friends,” one senior official explained, sensitive intelligence that it should not possess — such as that supplied by Pollard — “can spread to others.” Many officials said they were convinced that information Pollard sold to the Israelis had ultimately wound up in the hands of the Soviet Union.

Pollard has now served 23 years in jail. Let’s suppose President Flexibility likes the chiropractic manipulation the Israelis now want to give him. What does the US get in return?

The charade of Israeli-Palestinian talks gets dragged on until after the mid-term elections. Maybe during that time the administration can get a marginally useful story about how it’s advancing the peace process.

But let’s be even sunnier in our outlook. Let’s suppose that after an extension, the US then wins an unimaginable victory: an Israeli agreement to a permanent settlement freeze.

As a new map produced by Americans For Peace Now makes clear, Israelis already have their feet firmly planted throughout the occupied West Bank. Freezing settlement growth really does nothing to end the occupation. 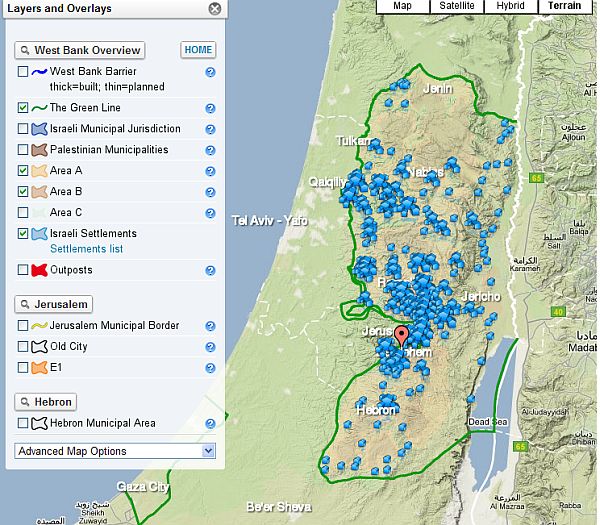 3 thoughts on “Israel now in proximity talks with the US”