Phil Weiss, who’s in Israel right now, sat down to talk with Jeff Halper, the Minnesota-born founder of the Israeli Committee Against House Demolitions, to hear his thoughts on the conflict. 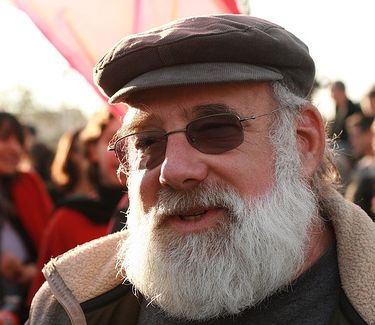 Halper would be happy living in a democracy with Palestinians. I asked him why so many Israelis don’t feel that way.

“There is a principle inculcated in Israelis and Jews from before 1948, by all politicians, newscasters, teachers, journalists, any official, and that is that the Arabs are our permanent enemies. And that’s it! And if you take that as an unchanging premise, then it doesn’t matter what is being done to Palestinians.They brought it on themselves.

“You can’t trust the Arabs. That makes everything else a non-issue… Yitzhak Shamir said, ‘The Jews are still the Jews, the Arabs are still the Arabs, and the sea is still the sea.’ Which means, it’s just the way it is, it’s nature. Arabs are what they are, and we are what we are, and nothing’s going to change that….”

But are Israelis even aware of the tapestry of suffering that is the occupation, and what this does to Palestinian lives?

“Israelis don’t care. Because they’re living the good life. Polls show that peace is the 8th issue in priority for Israelis. It’s like that cover ot Time magazine, Israel doesn’t want peace. I’ve been saying that for years…. And the Israeli government thinks it’s sustainable, they think they can keep this going for another 40 years. They have no idea that we’re living on borrowed time.

“And Israel is not going to cooperate and is not going to negotiate in good faith. Because of the Congress. The only way to go to some kind of peace is by exerting pressure on Israel, which the U.S. could do easily, but the president can’t do. And Israel feels completely protected. The U.S. can’t do anything to Israel, and it won’t let anyone else do anything to Israel. We start building settlements, and it’s, ‘So what?’”

I said that the status quo will bring on violence. Halper said he doubts it.

The good news is that now it’s globalized: the United States is becoming more and more isolated on this issue.

“I don’t think Americans appreciate how isolated they are internationally. This is now a global conflict, and so you have the irresistible force meeting the immovable object. The irresistible force is– the EU can make things hard on Israel economically, and the whole Muslim world can be up in arms, and you have BDS, Turkey, isolating Israel, and the international community saying that this is too costly to accept forever. But then the immovable object is the U.S. Congress.”