Anyone who carefully read the Washington Post‘s report on talks between the Karzai government and the Taliban should have been struck by this detail: “discussions with the Quetta Shura [Taliban leadership] do not include representatives of the Haqqani group.”

The Waziristan-based Haqqani network has for some time been described as the most formidable element in the Afghan insurgency, so how would the war end if the group that is most vigorously fighting it is left out of a reconciliation process?

The Guardian now presents the answer:

Hamid Karzai’s government held direct talks with senior members of the Haqqani clan over the summer, according to well-placed Pakistani and Arab sources. The US contacts have been indirect, through a western intermediary, but have continued for more than a year.

The indirect contacts with the Americans have been made through a non-governmental western intermediary, who has met Haqqani representatives in Pakistan several times in the past 18 months, and who has conveyed messages to and fro.

One said the relentless targeting of the Haqqani network fighters and leaders by US drones had devastated morale. “There is war-weariness on both sides. Not just in the west,” the diplomat said.

Another said the announcement by the US president, Barack Obama, that the troop drawdown would begin next July, had in turn encouraged the Haqqanis to come forward. “That conveyed a message that the Americans would not be there for ever, and they definitely were in the market for talks, and that opened a door,” the source said.

He predicted that talks with both the Haqqanis and the Quetta Shura would begin in earnest in December, after the winter snows cut the passes between Pakistan and Afghanistan and effectively end the fighting season.

In any future talks the critical demand from both Kabul and Washington would be for the Haqqanis to sever their ties to al-Qaida, whose leaders, including Osama bin Laden, are believed to be sheltering in the caves of North Waziristan.

A Pakistani official said yesterday that he believed the group was ready to make that step. “This is the end of the road for al-Qaida in Waziristan,” the official said.

Just over a year ago, the intrepid Ghaith Abdul-Ahad went to meet Haqqani fighters in their stronghold.

“We are Afghans fighting the jihad and defending our country under the leadership of Jalaluddin Haqqani,” the commander said. He spoke in a schoolmasterly tone. As well as being a commander, Mawlawi Jalali is a teacher in Haqqani’s madrasa.

“The Americans toppled the emirate [of the Taliban] and we are fighting to bring it back. When the Taliban were here the jihad was only in Afghanistan. Now, thanks to the Americans, the jihad has spread to many other countries.”

What about the new American surge, I asked. Did it concern him?

“We attack the towns, like in Wazi Zadran, where there is a strong American and Afghan garrison, and mine the streets every day. We average two or three attacks a day against the Americans and their allies. The more troops they send, the more targets we have, so it’s good.”

One Western military official said there was an unspoken agreement between Pakistani and American officials that United States Predator drones would generally be used in the tribal areas against foreign Qaeda members, rather than Pakistani or Afghan targets, like the Haqqanis.

If such an agreement existed, it clearly doesn’t any more.

Tom Gregg points out that the opportunity to draw the Haqqani network into a peace process will pass as soon as its leader, Maulavi Jalaluddin Haqqani, transfers power to his son. 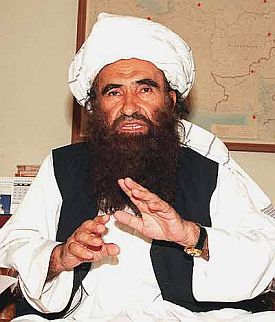 It is well known that for almost a decade he has suffered from health problems and requires regular medical attention rendering him relatively inactive in the day-to-day workings of the insurgency. Furthermore, as a senior insurgent commander (and former Taliban Minister), Maulavi Haqqani’s profile as a “most wanted” does not permit travel to the Afghan battle space. Consequently, his 36-year-old son Sirajuddin (aka “Khalifa”) has increasingly taken over, with gusto, operational command of his father’s network.

However, these limitations speak nothing of the influence Maulavi Haqqani continues to enjoy as a tribal leader, religious scholar, ISI associate and close ally of Gulf Arab financiers. Indeed, the success of the Haqqani network rests with these social/religious/political connections that Maulavi Haqqani has carefully nurtured over the past 30-plus years; indeed, it was these very factors that also made him so popular with the CIA during the anti-Soviet jihad). It can be assumed that these networks, particularly with Arab financiers and the ISI, have been “inherited” by Sirajuddin. However, the same cannot be said about Maulavi Haqqani’s tribal, religious and mujahideen credentials. Sirajuddin is in his early 30’s, grew up in Miram Shah, Pakistan and, prior to 2001, only occasionally traveled to his native village of Garde Serai, nestled in the rugged mountains of Paktia province. In Miram Shah he was involved in Islamic Studies but, unlike his father, did not graduate from a prestigious madrassah and is too young to have been a well-known fighter during the anti-Soviet jihad.

Hence, the very elements that have contributed to the success of Maulavi Haqqani’s activities in eastern Afghanistan (and that could be used to assist in a peace process) — his personal influence as a tribal leader, mujahideen commander and religious elder — will be lost after he dies or passes control to Siraj.