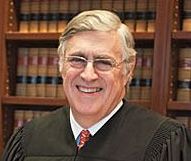 In a landmark case, the first trial of a former Guantánamo detainee, Judge Lewis A. Kaplan of United States District Court in Manhattan made a ruling that presents a major setback for the Department of Justice. He barred the key witness from testifying because he had been identified and located through torturing the accused, Ahmed Khalfan Ghailani, who was being held in a secret prison by the CIA.

Kaplan explained his decision in this way:

The Court has not reached this conclusion lightly. It is acutely aware of the perilous nature of the world in which we live. But the Constitution is the rock upon which our nation rests. We must follow it not only when it is convenient, but when fear and danger beckon in a different direction. To do less would diminish us and undermine the foundation upon which we stand.

At face value, this sounds like one of those rare feel-good moments in the post 9/11 era when someone who has sworn to uphold the Constitution took that responsibility very seriously.

“… the Constitution is the rock upon which our nation rests.” I imagine Judge Kaplan took satisfaction in crafting that sentence. It’s good.

But just in case anyone might be alarmed that the innocent-until-proven-guilty Ghailani might end up being acquited, the judge was eager to pacify such fears.

[H]is status as an “enemy combatant” probably would permit his detention as something akin to a prisoner of war until hostilities between the United States and Al Qaeda and the Taliban end even if he were found not guilty in this case.

So is Ghailani on trial to determine his innocence or guilt, or simply to decide on the location of his prison cell?

Isn’t that the direction in which fear and danger beckon?