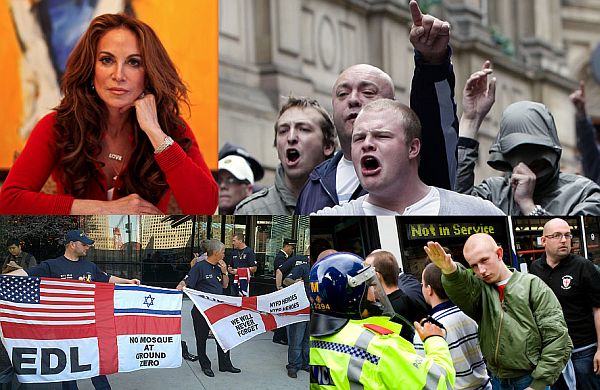 Pamela Geller — “hate monger and anti-mosque queen bee,” as she has been dubbed by Charles Johnson at the conservative blog where she got her start — has “helped bring into the mainstream a concept that after 9/11 percolated mainly on the fringes of American politics: that terrorism by Muslims springs not from perversions of Islam but from the religion itself,” write Anne Barnard and Alan Feuer in a New York Times profile.

Geller’s profile is twice the length of a piece Barnard wrote on Park51’s Imam Feisal Abdul Rauf in August. That’s presumably because Geller is now “a media commodity.”

Not until we get close to the end of the Geller profile do we hear mention of her connections to the notorious fascist group, the English Defence League.

Ms. Geller went on to champion as patriotic the English Defense League, which opposes the building of mosques in Britain and whose members have been photographed wearing swastikas. (In the interview, Ms. Geller said the swastika-wearers must have been “infiltrators” trying to discredit the group.)

In March, when the EDL held a rally in support of the visiting Dutch politician and anti-Islam leader, Geert Wilders, Geller wrote:

How I wish I could be there to stand with the English Defense League. 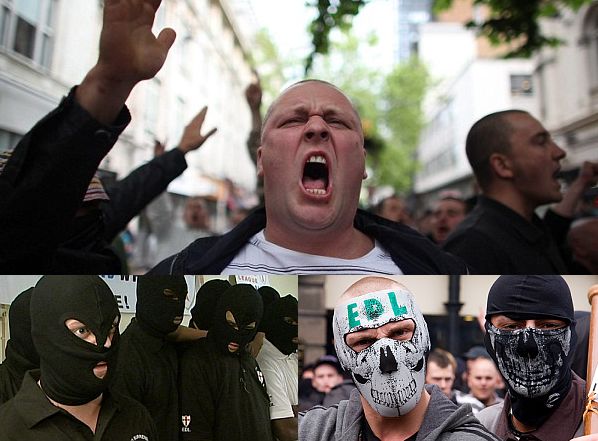 The EDL’s notoriety has no doubt been fueled by its more photogenic members and their drunken behavior, but the movement is not only attracting disaffected white skinheads.

In May, The Guardian (see also the accompanying video) recounted meeting an EDL leader who alluded to the group’s growing links to the US.

On a chilly evening in early March, Alan Lake settles into his seat in a cafe in central London. This smartly dressed man in his mid-40s has emerged as a key figure in the organisation and is quickly into his stride — warning that the UK will have Sharia law in the next 40 years “unless something is done”.

A London-based IT consultant, Lake has spoken at several EDL rallies and sees himself as one of the organisation’s thinkers. “The middle-class intellectuals are coming forward and also American speakers – some of them quite famous, although I can’t give you names yet … they love the fact that we can have people that can go on the streets.”

Addressing a far-right anti-Islam conference in Sweden last year, Lake told delegates it was necessary to build a united “anti-Jihad movement” and spoke of the need for “people that are ready to go out in the street”, boasting that he and his friends had begun to build alliances with “more physical groups like football fans”. Lake says he is opposed to violence or confrontation but regularly returns to the importance of the EDL’s physical presence.

In a post at the 4Freedoms Community website, Lake described his vision of segregation in the UK in the coming decades:

By forcing these liberal twits into those enclaves we will be sending them to their death, at worst, and at best they and their families will be subjected to all the depredations, persecution and abuse that non-Muslims worldwide currently ‘enjoy’ in countries like Pakistan, Iran and Egypt. It will be great to see them executed or tortured to death…

Please everyone, start to contribute the names of all those we will send with their wives and children to enjoy the religion of peace. We are taking away the middle ground for sympathisers and appeasers. Sure, they can say they support the gangsters of Islamism if they want, it’s their choice! But we will not let them just stand in the middle and say it, hanging back from actually BEING WITH those Hamas and Hizbullah endorsing gangs. If they like that so much, they can be with them, lock, stock and barrel.

Here’s some names to start off. Please note this is a discussion, we need to work it out before sending them to their sordid end.
1. Rowan Williams, the Archbishop of Canterbury
2. David Cameron [Britain’s prime minister]
3. Nick Clegg [Britain’s deputy prime minister]

After this post caught the attention of Indymedia, Lake made some revisions and wrote: “I said execute the leftists that left the Islamic enclaves — yes that was a bit provocative, but I was trying to be brief.”

In a further indication of the blossoming relationship between America and Britain’s anti-Islam movements, the EDL has announced an upcoming event, welcoming Rabbi Nachum Shifren who is a candidate for California State Senate District 26.

“The English Defence League Event @ Embassy of Israel” has this description on Facebook: 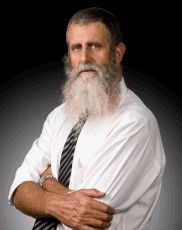 The English Defence League will be holding an event in London on Oct 24th in support of Israel, we have an orthodox Rabbi joining us from Los Angeles who is fighting Sharia in L.A and running for state congressman there, we sympathise with what Israel are going through, it’s the only country in the west that is tackling the issues we highlight, we have seen members of the Islamic community hold anti-Israel marches in England which the country is in disgust over but still no action from the government, our four [sic] fathers fought a Nazi regime and won to protect our god given human rights, we cannot allow such fascist ideologies try to rule our streets once again using the same racist tactics, the English Defence League ignited the flame that has awoke this whole world, we are at the fore front of this movement, we have to support our brothers and sisters worldwide the way they are supporting us.

A spokesman at the embassy told me they have nothing to do with the event and will be issuing a statement shortly.*

Lastly, back on Geller, the New York Times made no reference to her possible connections with organized crime.

In 2007, the New York Post reported on a murder that took place at a Long Island auto dealership where Geller was reported to be a co-owner. A car salesman, Collin Thomas, had been murdered outside the showroom of Universal Auto World. In the course of the investigation, detectives also uncovered evidence of an alleged million dollar scam.

Cops found banking records were sent to the house, though the state requires such files be kept at businesses, according to court papers filed in a civil forfeiture action by the Nassau district attorney.

“The dealership knew what was going on,” an investigator said.

Oshry’s lawyer, William Petrillo, said his client “has not engaged in any criminal activity.”

His ex-wife, Pamela Geller, former associate publisher of the New York Observer and a conservative blogger, burst into tears when told her ex is under criminal investigation.

Although listed in business records as a Universal co-owner, she denied it. “I have nothing to do with this,” Geller said.

Thomas’ fiancée, Cindy Heron, 21, said he was popular and successful. “All his customers loved him,” she said.

Universal shut its doors June 22 and liquidated its assets.

The New York Times does mention:

Ms. Geller got nearly $4 million when the couple divorced in 2007, and when Mr. Oshry died in 2008, there was a $5 million life-insurance policy benefiting her four daughters, said Alex Potruch, Mr. Oshry’s lawyer. She also kept some proceeds from the sale of Mr. Oshry’s $1.8 million house in Hewlett Harbor.

*Update: The Israeli embassy in London issued a brief statement today, Tuesday, saying that it “wishes to disassociate itself from next Sunday’s event, and from any attempts to link Israel to the EDL.”