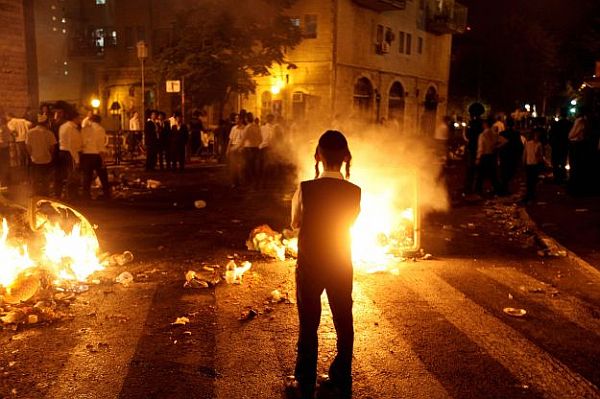 Carlo Strenger has an interesting op-ed in Haaretz. It’s worth reading the whole piece (part of which appears below). Comments of mine follow.

There is nothing left to say about how bad, harmful and useless the new citizenship law is: Labor Party Minister Isaac Herzog has warned that it is another step towards fascism; legal experts like Mordechai Kremnitzer have pointed out that it doesn’t serve any identifiable purpose except making Arabs feeling even less at home in Israel. Likud Ministers Benny Begin and Dan Meridor have pointed out how harmful the law is for the relation with Israeli Arabs and for Israel’s standing in the world.

Both Shas and Yisrael Beiteinu have already declared that they see this law as just a first step in a general attempt towards ensuring loyalty to the state by legislation. The time has come to ask what really stands behind this rising tide. The obvious answer seems to be that it is directed against both Israel’s Arab citizenry, whom Avigdor Lieberman is alienating and insulting almost every day, and Palestinians who want to gain Israeli citizenship.

But I think that this is not the whole story. Consider this strangest of alliances between Yisrael Beiteinu and Shas; one is a completely secular, ultra-nationalist, the other an ultra-Orthodox party. What do they have in common? Why are they lately so effectively cooperating with each other, together with other extreme-right parties?

I believe that what unites them is less a fear of Israel’s enemies (and Israel does have enemies). It is a visceral hatred for the Western values and the liberal ethos. They all hate freedom; they all hate the idea of critical, open discourse, in which ideas are discussed according to their merit. They keep criticizing what they see as the liberal bias of the media and academia, and they have made sustained attempts to curtail freedom of speech at the universities.

Lieberman’s disdain for these ideas breaks through at every possible moment: lately he has insulted French Foreign Minister Bernard Kouchner and Spanish Foreign Minister Miguel Moratinos, telling them they should take care of their own problems in Europe before they come to advise Israel. This has been typical of him for a long time: Lieberman thinks that Israel should turn east; that it should no longer define itself as a Western country, and should finally shake off Israel’s original commitment to be part of the Western world.

Shas has made clear for decades that it just plays along with democracy; that it doesn’t believe in the idea of citizens thinking critically: they believe that only their spiritual leader, Ovadia Yossef, must determine what is right and what is wrong. Other ultra-rightists have been feeling for a long time that the commitment to universal values is undermining their program for the greater Israel in which Palestinians should have no political rights.

They cannot stand the idea that a liberal democracy should be based on rational legislation and is open to criticism by all. They are furious that tribal loyalty is not above criticism. Just lately, national religious rabbis have claimed that studying at universities is a danger for young religious people, because they internalize too many enlightenment values.

We are really talking about a right-wing anti-liberal coalition united by an instinctive hatred against the idea that there are universal standards of rationality and of morality. They do not want to hear criticism of their worldviews that relies on ideas that have, for a long time, been common to the free world. What we are seeing is a fight about Israel’s cultural and political identity.

For many liberal Israelis, the proposed new citizenship law represents a red line which once crossed will lead inexorably to the end of Israeli democracy. The foundation of that fear is the conviction that Israel has a democracy to lose.

Point out the contradictions inherent in the idea of a Jewish democracy, which by its nature grants preferential rights to Jews, and the liberal-Zionist shrug is to say, it’s a work in progress. No democracy is perfect.

Still, a real threshold has emerged and it consists above all in matters of perception: Israel is becoming a state which no longer serves and is instead threatening the needs of liberal Jewish identity — an identity in which neither half is meant to subvert the other.

Israel is ceasing to be a Jewish state and turning into a state for some Jews.

One could argue that this has long been the case, since for most Jews Israel is either an imaginary life insurance policy or of no particular relevance to their own lives. Even so, what has sustained Israel is the importance of the idea of a Jewish state in the minds of most Jews, irrespective of where they choose to live.

No wonder the peace process has gone nowhere. The wrong parties have been engaged in negotiations.

There is no Israeli consensus because there is no Jewish consensus. The tribe no longer exists (if it ever did) but rather than confront that fact, it has been hidden behind a veil: the unquestionable need for a Jewish state.

As the need for a Jewish state becomes untethered from Jewish identity, no wonder there is a drive to chain it to the law.