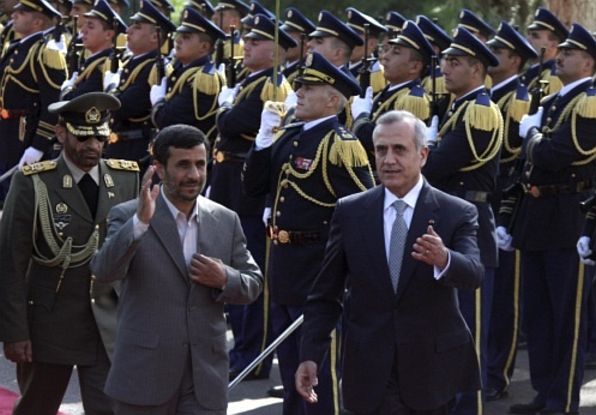 “It’s 1938 and Iran is Germany and it’s racing to arm itself with atomic bombs,” Benjamin Netanyahu declared four years ago.

By 1942, Germany had snared itself in the disastrous Battle of Stalingrad — but let’s allow Netanyahu some latitude with his metaphor and assume that it’s still 1938 and that Iran’s race has merely suffered a few interruptions.

So, it’s still 1938 and Iran’s Hitler has come to Israel’s border to survey the nation he intends wiping off the map.

Netanyahu will have a one-time opportunity to stop the new Hitler and thwart the incitement to genocide. Ahmadinejad will pay his first visit to Lebanon and devote an entire day to a tour of the southern part of that country. He will visit sites where Hezbollah waged battles against Israel and, according to one report, he will also pop over to Fatima Gate, just beyond the border fence at Metula. The route is known, the range is close and it is possible to send a detail across the border to seize the president of Iran and bring him to trial in Israel as an inciter to genocide and Holocaust denier.

The media effect will be dramatic: Ahmadinejad in a glass cage in Jerusalem, with the simultaneous translation earphones, facing grim Israeli judges. In the spirit of the times, it will also be possible to have foreign observers join them (David Trimble of the Turkel commission was a leader of the “try the Iranian president” initiative ).

There are also operational advantages: Iran will hesitate to react to its president’s arrest by flinging missiles, out of fear for their leader’s life. It will also be possible to capture Hezbollah leader Hassan Nasrallah, who will no doubt emerge from his hiding place and accompany Ahmadinejad. Israel will have high-ranking hostages it will be able to exchange for Gilad Shalit.

And if the world has any complaints, it will be reminded that the Americans invaded Panama in order to arrest its ruler Manuel Noriega – and only for dealing drugs, a far smaller offense than incitement to genocide.

Of course, the idea also has disadvantages. Ahmadinejad might be killed in the action and Iran would embark on a cruel war of revenge. The precedent of arresting leaders would endanger Israeli personages suspected abroad of crimes against humanity or murder (according to the Goldstone report and the flotilla report ). Ahmadinejad could be acquitted and make Israel look like a bully and Netanyahu a fool.

Nevertheless, how can Netanyahu refrain from an action to stop Hitler’s heir, when the year is already 1939, if not 1940? According to Netanyahu’s reasoning, if he refrains from acting history will condemn him for “not preventing a crime,” as with Margalit Har-Shefi, who didn’t stop Yigal Amir from assassinating Yitzhak Rabin.

Benn’s point was not to advocate a reckless course of action but to underline the difference between rousing rhetoric and statesmanship.

For all those inside and outside Israel who swallowed Netanyahu’s rhetoric however, this is a telling moment to reflect on the proposition that the clown from Tehran — provocative as he might be — can seriously be compared to Hitler. Anyone who still clings to this notion must now consider its corollary: that if Ahmadinejad is Hitler, then Netanyahu — through his inaction — turns out to be a Chamberlain not Churchill.

So how truly significant is it that Iran’s president is currently now enjoying all the honors of a visiting head of state (even though he isn’t one)?

Rhami Khouri puts the drama in perspective and says:

[Ahmadinejad’s] visit represents a blow to Washington’s strategy of bringing Lebanon firmly into its orbit.

For most Arab governments, the Iranian-Hizbullah connection represents everything they fear for their own incumbency: armed Shiite movements inside countries where mostly Sunni Muslim Arabs dominated public life; popular resistance movements that do battle according to their own strategic calculations; Iranian meddling in Arab affairs; and, Arab mass movements that connect with compatriots across the region in their common opposition to and defiance of conservative Arabs, Israel and the US itself.

So at some levels it is understandable why so many people in the region and abroad are making a lot of noise about the Iranian president’s visit to Lebanon. At another level, though, that of substance vs. symbolism, this is a pretty routine event that does not necessarily break new ground, but mainly reflects and emphasizes existing political realities that generate frenzied, nearly hysterical, reactions on both sides.

The irony is that by elevating his importance on the international stage while his real challenges come from home, no one serves Iran’s president as more effective publicists than do Israel and the United States.

Ahmadinejad has never been more unpopular in Iran, not only with the public but also his conservative allies and the clergy. By going to Lebanon, he is going to one of the last places where the Islamic Republic still has genuine support. When he speaks in Bint Jbeil, unlike in Iran, schools won’t be closed and civil servants won’t be threatened with dismissal unless they attend the president’s speech. People will voluntarily turn up because they genuinely support the Islamic republic and will pay respect to almost any senior Iranian politician.

By going to Lebanon, Ahmadinejad will primarily be using the occasion to try to strengthen his support back home with the public, and with the Revolutionary Guards, whose support is important to him. He will also be trying to outshine his rivals such as Ali Larijani and Hashemi Rafsanjani by using the trip to say that he is the true face of Iran abroad, and not them.

This development will also benefit supreme leader Ali Khamenei, who is most probably very concerned about Ahmadinejad’s flagging popularity.

However, Khamenei did not send Khatami to southern Lebanon because he was not worried about his unpopularity. In fact, compared with Ahmadinejad, he was far more popular. The opposite is true about Ahmadinejad and this is why Khamenei, for the sake of his regime, is sending him there.

The RealNews Network has an interesting report on Ahmadinejad’s posture as an anti-capitalist.