So, as just about everyone now knows, NPR analyst and Fox News contributor, Juan Williams said this to Bill O’Reilly on Monday:

I’m not a bigot… But when I get on the plane, I got to tell you, if I see people who are in Muslim garb and I think, you know, they are identifying themselves first and foremost as Muslims, I get worried. I get nervous. 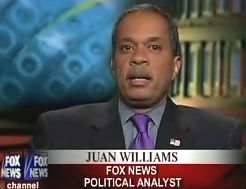 When someone says, “I’m not a bigot,” we can generally be sure they’re about to say something that we’d expect to come out of the mouth of bigot. We can also infer that they’ve bought into an improbable idea: bigots identify themselves as such. Thus the implausible disclaimer: take my word for it — I’m not a bigot. Err, OK Juan, but I’m sorry. You don’t sound too convincing.

The notion that “people in Muslim garb are scary” is widespread in America, and its noxious that many people believe as much. Countless people getting on planes have thought the same thing as Mr. Williams. This is exactly the sort of case where airing and logically refuting a bigoted view is better than making it so that it’s an unspoken thing that many people persist in thinking privately.

Thanks to NPR’s knee-jerk reaction, more is now being said about the fact that Williams got fired than the fact that what he said was both prejudiced and dumb. Not only does the debate have the wrong focus but Williams has now been rewarded for his “blunder” by getting a new three-year contract from Fox News worth almost $2 million.

The people with the greatest regrets right now are probably local NPR station managers whose current fundraising efforts have been disrupted by the ruckus.

NPR’s CEO Vivian Schiller says: “This isn’t a case of one strike and you’re out.” They have had “an on-going issue” with Williams.

The problem is, each time a journalist gets fired for making a dumb remark, this doesn’t improve the overall quality of journalism. Instead it means that those journalists who are most disciplined in concealing their views will have a professional advantage over those journalists guilty of the occasional indiscretion. My suspicion is that the well-wrapped bigots are more common than the bigots with loose tongues. Bigots are better clearly labelled than fired.

What consequences should Williams have faced for revealing his Islamophobia? How about mockery on the Daily Show where the evidence that known terrorists do not wear “Muslim garb” would swiftly have exposed the folly behind his fear.

What should really scare Williams and anyone else who wants to play spot-the-terrorist next time they fly is that terrorists can wear business suits, carry US passports and have names like David Headley.

4 thoughts on “How to deal with Islamophobia in the media”