The conflict between religious imperatives and the legal obligations one has as a citizen of a secular state — a state that does not take into account the religious affiliations of its citizens when crafting laws — is an old one…; but in recent years it has been felt with increased force as Muslim immigrants to Western secular states evidence a desire to order their affairs, especially domestic affairs, by Shariah law rather than by the supposedly neutral law of a godless liberalism. I say “supposedly” because of the obvious contradiction: how can a law that refuses, on principle, to recognize religious claims be said to be neutral with respect to those claims? Must a devout Muslim (or orthodox Jew or fundamentalist Christian) choose between his or her faith and the letter of the law of the land?

The context in which Muslims in America find their religion under assault is riddled with contradictions. Islamophobia — as The Tennessean reports — has become a profitable business in which fearmongers who profess no expertise on the subject are couching the “threat” from Islam in similar terms to the Red Menace of the 1950s.

“Islam,” says Pastor Darrel Whaley from Kingdom Ministries Worship Center in Rutherford County, Tennessee, “is political; it is ideas and philosophies; it’s not a religion at all… They want to take over America and the whole world.”

(The image in this video freezes after one minute but the audio continues uninterrupted.)

At the same time that Islam is being presented as an ideological threat to America, among those receptive to this message, another message resonates with equal strength: that Americans of faith are threatened by secularists who insist on imposing a separation of church and state.

When Colorado Republican Senate candidate and Tea Party favorite Ken Buck declared: “I disagree strongly with the concept of separation of church and state,” he drew a strong round of applause. Secularism and Sharia are seen by many as a dual threat to the American way of life.

One might imagine that — at least in theory — it would be possible for the embattled faithful, both Muslim and Christian, to find some common ground — at least one would if it were not for the fact that Christianity in America is in so many ways a secularized religion. That’s why the idea of religion shaping the whole life of the faithful is presented as foreign.

Religion in America has less to do with the devotional and ethical practices that circumscribe religious life, than with the experience of belonging to communities of affiliation within which a religious national identity finds expression. It’s about banding together around particular definitions of what it means to be American and taking on battles against those who pose a threat to these definitions.

For that reason, the fight against abortion is a much more popular cause than the fight against adultery. As with most crusades the preferred battleground is not home turf. Religious solidarity comes less through shared practice, than shared animosity.

But before the secularists here (and I include myself) start feeling too smug, Fish makes an important point:

[T]he respect liberalism can accord Islam (or any other strong religion) is the respect one extends to curiosities, eccentrics, the backward, the unenlightened and the unfortunately deluded. Liberal respect stops short — and this is not a failing of liberalism, but its very essence — of taking religious claims seriously, of considering them as possible alternative ways of ordering not only private but public life. 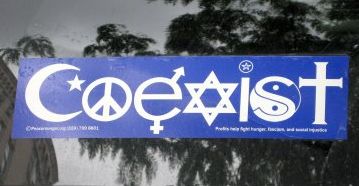 On that basis, it’s easy to adopt a live-and-let-live philosophy — well encapsulated in the COEXIST bumper sticker — in which tolerance is a kind of benign indifference. But coexistence in healthily functioning pluralistic societies must really go much further.

In an interesting talk, Muneer Fareed points out that the challenges America now faces have been addressed before and indeed that Islam in its formation saw its own existence in a pluralistic context.

[The Quran says] If God had so wanted, then all of humanity would be following one way. This is clear unmistakable evidence from the text itself, that Islam is a religion that doctrinally endorses, encourages and accomodates religious pluralism.

The faithful and fearful across America will remain unmoved, convinced paradoxically that this is an argument they cannot win even while truth remains on their side. According to the evangelicals, God does want all of humanity following one way and has chosen men like Pastor Darrel Whaley and Pastor Terry Jones to shepherd us in the right direction.

8 thoughts on “The challenge of religious pluralism in America”