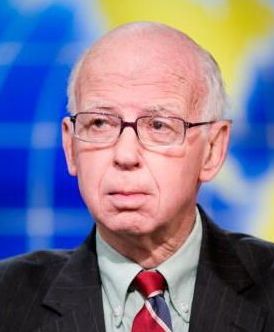 What kind of institutional entity do the hacks in Washington constitute such that they can have a “dean”?

When David Broder is referred to as the dean of the Washington press corps, I guess it’s just a complimentary way of saying the old guy. But Broder’s nine years younger than Helen Thomas. How come she never rose to the same stature? Is baldness a requirement?

In spite of his institutional stature, Broder’s mental capacities have in recent years come into question and his op-ed in the Washington Post on Sunday provides yet another occasion to wonder what is going on inside this man’s brain as he pushes for war against Iran.

War and peace influence the economy.

Look back at FDR and the Great Depression. What finally resolved that economic crisis? World War II.

Here is where Obama is likely to prevail. With strong Republican support in Congress for challenging Iran’s ambition to become a nuclear power, he can spend much of 2011 and 2012 orchestrating a showdown with the mullahs. This will help him politically because the opposition party will be urging him on. And as tensions rise and we accelerate preparations for war, the economy will improve.

I am not suggesting, of course, that the president incite a war to get reelected. But the nation will rally around Obama because Iran is the greatest threat to the world in the young century. If he can confront this threat and contain Iran’s nuclear ambitions, he will have made the world safer and may be regarded as one of the most successful presidents in history.

So another war is going to rescue the economy? But just a minute — if war’s such an excellent economic tonic, how come we aren’t already in great shape? A decade of war just hasn’t been quite enough?

It’s easy to mock Broder’s prescription and even to wonder whether he’s lost his grip on reality, but maybe he’s not quite as crazy as he sounds. Read more carefully, this is not actually a call for war — it is a call for the continuously escalating threat of war.

This is indeed the most likely “lesson” that some have drawn from the experience of Iraq: that the best kind of war is the one that has yet to be fought. A war that can be budgeted for, equipped for, and around which politicians can construct their postures of strength, resolution and righteousness. The context is one in which we have been encouraged to think that war is normal. War is in fact so normal that Washington pundits can now present it as a useful economic tool.

Washington’s lead comes from Israel, which has less interest in starting a war with Iran than in promoting the idea that war might be just over the horizon — a kind of Goldilocks war, not too far away and not too close, but just close enough. In this delicately modulated threat of mayhem, Iran itself remains politically and economically boxed in, while issues which merit more urgent attention — namely the intractable Israeli-Palestinian conflict — can be shunted to one side.

Two countries so heavily invested in manufacturing the means for engaging in war, actually have less interest in wars being fought than in a war-footing constantly being maintained. The problem is, a war posture can only be maintained for so long and momentum only be built up so much before a turning point is reached: war either then becomes inevitable or a real alternative has to be pursued.

Only through the hubris which metastasizes inside the brains of those trapped inside the Washington bubble, can anyone fail to see that the process of backing Iran into a corner risks the United States becoming trapped by the narrow logic of its own strategy. War is not normal. It is a failure of imagination.

3 thoughts on “Broder and Israel’s Goldilocks war against Iran”