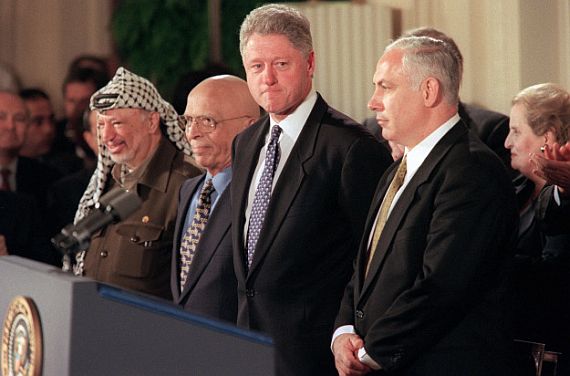 Bill Clinton referring to Benjamin Netanyahu in 1996: 'Who the fuck does he think he is? Who's the fucking superpower here?'

Less than two weeks ago, while observers gathered around the fetid corpse of the Middle East peace process, once again looking to see whether it might miraculously spring back to life, Laura Rozen reported:

[T]he New America Foundation’s Steve Clemons said he is convinced that the man who can help Obama bring peace to the Middle East is former President Bill Clinton. That is the spouse of Obama’s Secretary of State Hillary Clinton.

“Bill Clinton is the only guy I can think of who is trusted and liked by all sides,” Clemons told Politico. “He is the only guy I know who successfully wrestled and pushed Netanyahu to do what he wants to do. And Clinton has spectacular popularity in Israel and Obama doesn’t.”

The former president “has granular understanding of every deal and piece of the deal – behind the scenes stuff that has been distorted and reframed,” Clemons continued. “No one has a better grasp, … sees the opportunity and has the global stature to both cajole, seduce and embarrass” the parties towards an agreement.

And under that scenario, which Clemons concedes is a float though one influenced by some kibitzing on the peace process with Bill Clinton at an event last week, how would Obama control the force that is Bill Clinton?

“Why would you want to control him,” Clemons responded. The Israeli-Palestinian conflict “has become a global fault line in the eyes of the world, and a manifestation of America’s weakness today. It has far greater significance” strategically “than northern Ireland. My bet is this is one of several defining issues” for the U.S. and the Obama administration, Clemons continued.

And how would Hillary Clinton not lose her authority as Secretary of State if her husband played such a role?

“Hillary Clinton should embrace and support what he does, giving him the latitude to be a creative player,” Clemons responded. “He can outmaneuver” the obstacles to an agreement and “all their corks will rise.”

Lo and behold the force that is Bill Clinton has appeared like a comet soaring over the horizon, shining light when all seemed consumed by darkness. Or maybe not.

In his remembrance of Yitzhak Rabin who was assassinated 15 years ago, Clinton’s main message seems to be that Rabin could have delivered on the implementation of the two-state solution — but he got shot, and the rest is history.

In Clinton’s view, all the necessary pieces for a resolution to the conflict are now lined up — everyone just needs to get on with the work at hand.

Let us pray on this anniversary that [Rabin’s] service and sacrifice will be redeemed in the Holy Land and that all of us, wherever we live, whatever our capacity, will do our part to build a world where cooperation triumphs over conflict. Rabin’s spirit continues to light the path, but we must all decide to take it.

Those are not the words of an unstoppable force. “We must all decide” is really just a positive construction on the assertion that has been repeated so many times before: “We can’t want peace more than the parties themselves.”

If Clinton is laying groundwork here it is not for his own entry into the fray; it is instead the path along which Obama can gracefully bow out by saying, I did what I could but the time was not right.