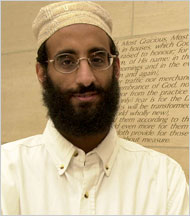 Anwar al-Awlaki, the militant Islamic cleric in hiding in Yemen, was being denounced in the US and Britain last week as an arch-conspirator against the West, leading to hundreds of videos of his speeches and interviews being hurriedly removed from YouTube.

Awlaki, an eloquent preacher, is alleged to have radicalised Roshonara Choudhry, the theology student who stabbed Stephen Timms MP for voting for the Iraq war. Awlaki was also in contact with militant Muslims who later attacked American targets, such as the Nigerian student with explosives sewn into his underpants and the US officer who shot dead 13 of his fellow soldiers at Fort Hood.

On the videos of Awlaki still available on YouTube, often excerpts from his speeches broadcast on US TV, his message remains chillingly clear. In a soft, measured voice he describes how he was born in America, lived there for 21 years and became an Islamic preacher, advocating non-violence until the invasion of Iraq in 2003. This turned him into a supporter of holy war against America: “I eventually came to the conclusion that jihad against Islam is binding for Muslims.”

(That should of course read “jihad against America” and Cockburn’s gaffe should have been caught by the Independent‘s editors.)

The fact that Awlaki is currently being turned into a larger than life figure is highlighted in this report from Yemen, appearing in the Los Angeles Times:

Americans may regard the U.S.-born cleric with the beard and hard stare as a new face of terror, but when you mention Awlaki in the Yemeni capital, it’s as if you’ve asked someone to solve a complicated bit of arithmetic. Eyes narrow, faces scrunch.

“I don’t know who he is. I work all day and don’t watch a lot of TV,” said Ibrahim Abdulrab, standing over an ironing board with a pile of shirts at his feet.

The radical preacher is on the CIA’s assassination list and is believed to be hiding with Al Qaeda fighters in Yemen’s mountainous tribal lands. He is implicated in a number of plots, including inspiring a U.S. Army psychiatrist who is charged with killing 13 people a year ago at Ft. Hood, Texas, and the recent attempt to blow up aircraft with packages of concealed explosives.

Internet videos, website manifestos and pundit rhetoric are splicing Awlaki into the American consciousness. But he is largely unknown here or referred to as an apparition hiding in a distant crevice. Even his Al Qaeda in the Arabian Peninsula is scoffed at by many as an invention, a ploy by Washington and Yemeni President Ali Abdullah Saleh to advance larger agendas.

What’s interesting about the way in which Awlaki has rapidly been elevated to the status of latest and greatest threat to America is that his potency as a radicalizing force is clearly being amplified by those who regard him as a threat.

As Cockburn notes: “Most alarming for the US and British governments, Awlaki’s words are directed primarily at English-speaking Muslims. He asks how American Muslims can give their loyalty to a country that is at war with Islam.”

These are the competing narratives of the ideological fight in which Awlaki has been cast as the West’s new nemesis:

On the one hand Western governments claim that the most dire threat to democracy comes from small groups of Islamic extremists, mostly scattered across the Middle East — even while inside these threatened Western countries, life continues largely as normal with little or no evidence that these are nations at war — such as during the US midterm elections where war barely got mentioned.

On the other hand, ideologues such as Awlaki assert that America and its allies are engaged in a war against Islam — that claim being rather strongly reinforced by the fact that the Middle East has been ripped apart by a decade of war in which the overwhelming majority of the hundreds of thousands of casualties have been Muslim men, women and children.

As vehemently as Western politicians might deny the existence of a war against Islam, Muslims do not have to be wild-eyed conspiracy theorists to conclude otherwise.

So this leads to the question of how exactly the threat posed by Awlaki is being measured. Is it, as we have been told, that he has had an instrumental role in planning acts of terrorism? Or is it that he poses an unacceptable risk because he has the capacity radicalize others in the same way that he himself was radicalized and that worst of all, these others are, so to speak, on the wrong side of the border?

If Awlaki can be assassinated because he expresses what have simply been deemed dangerous ideas then we live in an era in which democracy is being destroyed in the name of saving democracy.

The Predator drones now hunting Awlaki are not simply in the business of thwarting future acts of terrorism. Awlaki’s death will ensure that he never goes on trial — a prospect whose improbability is underlined by the fact that he has been selected for assassination even while in the United States no warrant for his arrest has been issued.