For more details on the protest during Benjamin Netanyahu’s address to the Jewish Federation’s General Assembly in New Orleans yesterday, see the post below.

One of the protesters has now provided her own first hand account of what happened. Although sheriffs were in attendance to provide security for the event, in the end the police needed to protect the protesters from the mob! 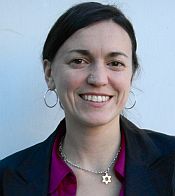 I stood up and unfurled a pink banner that read, “The settlements betray Jewish values” and in Hebrew: “Justice, justice you shall pursue,” a verse from Deuteronomy. The crowd had grown increasingly hostile with each disruption, and I was instantly attacked from all sides. A man in the row in front of me pulled the El Al seat cover off his chair and tried to gag me with it. Another man came up from the side and grabbed me by the throat. I fell into a pile of chairs until two female sheriffs buoyed me up and hustled me out of the room. The police later confided that they were trying to protect me from the angry mob and get me out of there in one piece.