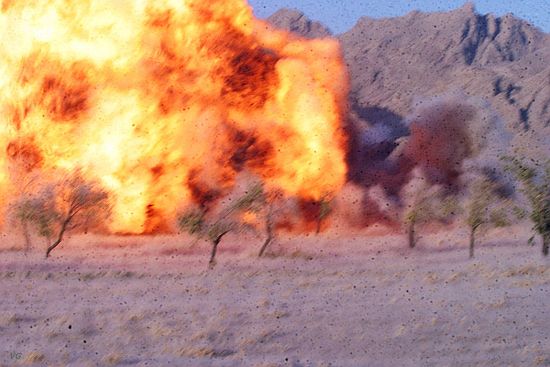 You first have to destroy the nation so that you can then rebuild it — this seems to be innovative thinking that Gen David Petreaus has brought to Afghanistan.

Flatten a farmer’s home, destroy his source of livelihood, and then hand him a compensation card that can only be redeemed by an Afghan government official. This, we are supposed to believe, is a way of strengthening the connection between Afghans and their government.

No need to ask why this is a war with no end in clear sight.

The U.S. military has destroyed hundreds of Afghan civilian homes, farm houses, walls, trees and plowed through fields and buildings using explosives and bulldozers in war-torn Zhari district, a practice that has begun to anger Afghan villagers.

The much anticipated third phase of the Kandahar campaign, called Operation Dragon Strike, has U.S. troops from the 2nd brigade, 101st Airborne Division pushing into a dangerous swath of once-Taliban dominated territory from Highway 1 to the Arghandab River.

But it has come at much material cost to the Afghans, who complain that the troops are destroying their property, leaving some homeless and blocking their irrigation canals —potentially derailing the all-important counterinsurgency strategy that aims to win the hearts and minds of regular Afghans.

“You bulldozed some of my trees, they’re blocking the canal, now we can’t get water to the orchard,” Haji Jilal, a frail, weathered Afghan farmer with a white beard said to one of the U.S. military’s Afghan interpreters on a recent patrol here.

Military officials said the majority of the buildings blown up, and fields and walls plowed through, have been either booby-trapped or used by the Taliban as hideouts and shooting positions.

They also argue the destruction is actually a positive development — it forces Zhari residents to go to their local government center for compensation. U.S. Army commanders see this as a way to kick-start progress toward the final goal of the Kandahar campaign: connect the people of Zhari district to the Afghan government.

3 thoughts on “US military destroys hundreds of Afghan homes”