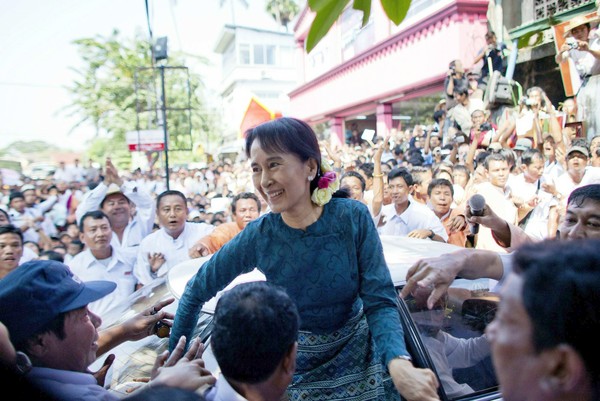 A day after her release from detention, opposition leader and Nobel Peace Prize laureate Aung San Suu Kyi on Sunday met dozens of ambassadors, hundreds of journalists and thousands of Myanmar citizens, underscoring the importance of dialogue, strength and determination in the battle for democracy in her country.

As a jubilant crowd swelled in front of the headquarters of her disbanded National League for Democracy party, traffic ground to a halt, and people perched in trees, on fences and on vehicle roofs for a look at their charismatic leader.

Her eventual appearance at noon in the doorway of the ramshackle building electrified the audience. “I understand what the people want; they want democracy,” she said to a roar from the crowd. “You must make your voices heard. Only then can we take action.”

An editorial in The Guardian notes:

Those who have campaigned for her release, including many western governments, have cause to celebrate. But this is not yet a defining moment in Burmese history, let alone the “Mandela moment” some believe they see.

Nelson Mandela was freed because those who ruled South Africa knew the game was up, that apartheid was unsustainable. Burma’s military rulers, by contrast, are determined to prolong their grip on power. They have held a bogus election and the party they created to win it has duly won. A general in a lounge suit is prime minister. Some nations, eyeing new trade opportunities, will be amenable to the idea of easing sanctions. Achieving that end is one of the calculations behind Suu Kyi’s release.

She is a symbol of hope, fortitude and strength – one Nobel peace prizewinner whose reputation never falters. But the generals may also reckon that she is a symbol from the past who might struggle to engage with the reality of modern Burma. Her own party, which didn’t contest the election, is split. Her tactical options are narrow and perilous. She has, after all, been locked away twice before. If she causes trouble, she could quickly rejoin the 2,000 unreleased political prisoners.