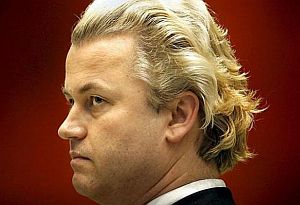 I spent last week in Amsterdam, where I participated in the “Return of Ghosts” symposium of the Nexus Institute, a discussion/debate about the resurgence of neo-fascism in Europe and anti-democratic trends in the West. Besides providing a forum for debating European politics, the symposium was the occasion for the first public appearance in Europe by Peruvian writer Mario Vargas Llosa since he was awarded the Nobel Prize for Literature last month. The arrival of Vargas Llosa, one of the world’s foremost intellectuals, resulted in an overflow crowd filled with members of the Dutch media, the country’s political class, and the royal family.

Even with Vargas Llosa in the spotlight, the participants’ attention was focused on Geert Wilders, the leader of the far-right Dutch People’s Party for Freedom and Democracy, which is now the third leading party in the Netherlands. With his gathering influence, Wilders has essentially placed the Dutch coalition government in a stranglehold; the government meets with him every Wednesday to gauge his opinions and ask for his instructions. While Wilders dictates at will to the government, he remains independent of it, comfortably avoiding the consequences of policies he has helped to shape. It is the perfect position for a politician whose agenda is comprised exclusively of xenophobic populism, and typical strategy of the far-right in countries across the continent.

Wilders’ base lies in the mostly Catholic south, where ironically few people have ever encountered a Muslim. He has also generated support in the city of Groeningen, once a citadel of the communists. Seeking to expand his base, Wilders promised to hire scores of “animal cops” to investigate and prosecute the abuse of animals, a clever wedge strategy in the only country I know of that has a party dedicated exclusively to animal rights. Of course, Wilders could care less about our furry friends. His stated goal is to end immigration not just to Holland but to all of Europe; ban the Quran (free speech is only for the “Judeo-Christian” community), and severely limit the rights of Muslim citizens of Europe by, for instance, instituting what he called a “head rag tax” on Muslim women. Wilders’ international allies include the goosestepping neo-Nazis of the English Defense League, the far-right pogromist Pam Geller, the Belgian neo-fascist party Vlaams Belang, and a substantial portion of the US neocon elite. Over the course of just a few years, he has become perhaps the most influential Islamophobe in the world.