In a presentation to the World Affairs Council in San Francisco earlier this year, BR Myers spoke about the way North Koreans think of themselves and how their image of their own racial purity shapes their view of the world. 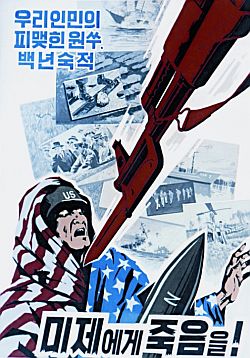 This country really has nothing else with which to inspire its people with pride than shows of military or nuclear strength… North Korea has enshrined the military-first principle in the constitution. It has deleted the word communism from the constitution, as well. So this regime is looking at this military-first paradigm for the long haul, in other words.

It’s not really important [who the next leader is]… because whoever takes over is going to be faced with this same quandary really, which is: how do we go from being a military-first country, to say, a economy-first country without losing all reason to exist as a separate state. And this is why it is so unrealistic for us to expect them to trade military strength for a mere aid deal.

Let’s say we increased their standard of living by 20% over the next five years, which would be an awful lot, that would not help King Jong-il politically because North Korea would still be hopelessly behind South Korea in economic aspects, and therefore, North Korea would have no reason to exist as a separate Korean state. All that it has now, its only source of legitimacy, is the claim that it alone is standing up to the Yankee enemy — the race enemy.

So to people who are optimistic about the six-party talks or the bilateral talks or whichever talks are supposed to take place, I ask the question: where does North Korea go, if it disarms? What does it do with itself? How does it justify its existence? And none of the optimists with whom I’ve talked to has been able to give me an answer. And they may not consider this a big problem, but we can be pretty sure that Kim Jong-il realizes how big a problem it is, and this is why I am so pessimistic for the prospects for arms talks. Because you can talk a regime into doing a lot of things, but one thing you can’t make it do is commit political suicide. And this is where the left wing and the right wing and the center in America are all wrong about North Korea. The left wing is wrong because you cannot bribe or sweet talk a country into committing political suicide. The right wing is wrong because you can’t bully it into doing that either. The center is wrong for thinking that you can get the Chinese to persuade them to do it.