The post-Soviet state of Uzbekistan is a nightmarish world of “rampant corruption”, organised crime, forced labour in the cotton fields, and torture, according to the leaked cables.

But the secret dispatches released by WikiLeaks reveal that the US tries to keep President Islam Karimov sweet because he allows a crucial US military supply line to run into Afghanistan, known as the northern distribution network (NDN). 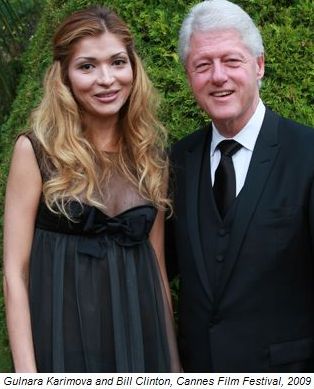 Many dispatches focus on the behaviour of Karimov’s glamorous and highly controversial daughter Gulnara, who is bluntly described by them as “the single most hated person in the country”.

She allegedly bullied her way into gaining a slice of virtually every lucrative business in the central Asian state and is viewed, they say, as a “robber baron”. Granted diplomatic status by her father, Gulnara allegedly lives much of the time in Geneva, where her holding company, Zeromax, was registered at the time, or in Spain.

She also sings pop songs, designs jewellery and is listed as a professor at Tashkent’s University of World Economy and Diplomacy.

The British ambassador in Tashkent, Rupert Joy, was criticised by human rights groups in October when he helped boost Gulnara’s image by appearing with her on a fashion show platform.

The US is anxious to broaden its influence in Central Asia — and limit that of Russia. The result, however, are questionable alliances with some of the strangest despots in the world.

The secret country assessment from the US Embassy in the Tajikistan capital of Dushanbe, prepared for General David Petraeus on Aug. 7, 2009 ahead of his visit later that month, described a country on the brink of ruin. Tajikistan, a country of 7.3 million people on the northern border of Afghanistan, is a dictatorship ruled by Emomali Rakhmon, a former collective farm boss and notorious drunkard. “Parliament acts as a rubber stamp, barely discussing important legislation such as the national budget,” the dispatch noted.

Some of the state’s revenues were from criminal sources: “Tajikistan is a major transit corridor for Southwest Asian heroin to Russia and Europe.” The country had “chronic problems with Uzbekistan,” its neighbor, and the impoverished former Soviet republic faced the prospect of civil war fomented by Islamists in the east of the country.
Nevertheless, Petraeus, at the time head of US Army Central Command, was urged to court Rakhmon. The US needed his help in Afghanistan. The US had other ambitious goals in the region as well. The US, in recent years, has serenaded several former Soviet republics in Central Asia — oil interests, counter-terrorism assistance and American influence in the region inform the approach. As a result, US diplomats have had to cozy up to a collection of decidedly shady characters.

In the case of Tajikistan, Petraeus’ task was clear: “Secure Rakhmon’s agreement to accept transit of lethal materials to Afghanistan through Tajikistan” — arms and ammunition for US troops. In return, the US could offer assistance in quelling the Islamists: “Assure Tajikistan of our support as it works to contain militants in the east of the country.”