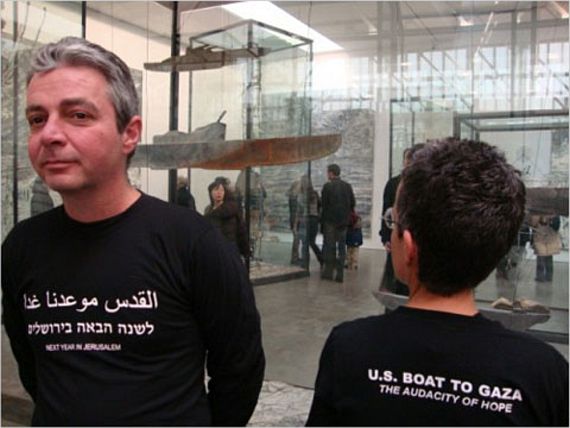 Does this say more about the sensitivities of the Gagosian Gallery’s wealthy patrons or its owner, Larry Gagosian, or do they each find the mention of Gaza (and by implication, reference to Israel’s inhumane treatment of Gaza’s residents) offensive?

Four activists were forced to leave an art gallery in New York this month for wearing T-shirts promoting an effort to include an American boat in the next blockade-challenging Gaza flotilla.

The incident came on the final day of an exhibition at the Gagosian Gallery called “Next Year in Jerusalem,” featuring pieces by the German artist Anselm Kiefer on the subject of Nazi Germany and the Holocaust.

The T-shirts worn by the activists repeated the show’s title, which is borrowed from a Jewish prayer, in English, Hebrew and Arabic, on the front and said “U.S. Boat to Gaza” and “The Audacity of Hope” on the back. (As The Lede explained in a previous post, the American activists plan to call their boat the Audacity of Hope, echoing the title of a book by President Obama.)

As Claudia Roth Pierpont reported in an account of the incident on the New Yorker’s Web site last week, the gallery, on West 24th Street, called the police, and force was used to eject one bystander who asked the officers why the activists were being ordered to leave.