Largely because of his advocacy of psychedelic drugs, Tim Leary became a high-profile political prisoner whom Nixon called “the most dangerous man in America” (the same label Nixon used to describe Daniel Ellsberg). Leary was sentenced to ten years in prison for possession of .0025 grams of cannabis.

After escaping from prison in 1970, he became the object of an international manhunt. Finally captured in Afghanistan, he was kidnapped by the CIA – there was no extradition treaty between the two countries – and brought back to face four more years in prison, including long stretches in solitary confinement, before he was released in 1976. The following is an excerpt from a text he wrote in maximum-security Folsom Prison, California, in May 1973. — Michael Horowitz

Timothy Leary writing at the time of Watergate: 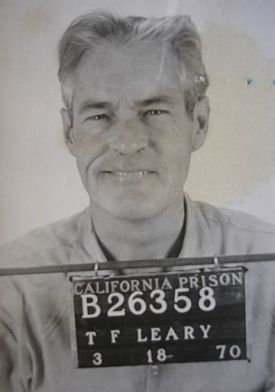 When you think about it, secrecy is the cause of the whole flap. Ellsberg and Russo published some secrets. Leaks in the White House. The plumbers steal Ellsberg’s psychiatric secrets. And bug the Democrat’s phone calls. The entire White House is involved in cover-up. The hearings center on cover-up of the cover-up.

Secrecy is the enemy of sanity and loving trust. If you keep secrets, you are an insane paranoiac. Concealment is the seed source of every human conflict. Secrecy is always caused by guilt or fear. [Gordon] Liddy’s parents were guilty about sex. And Nixon’s parents. It drives them crazy when he secretly suspects that she’s keeping secrets so he hires a private detective and vice versus.

Let’s break out of the huddle. Before [FBI Director] J. Edgar Hoover there were no secret police in this country. Before World War II there was no C.I.A. and America was amazingly unconcerned with secrecy. The hidden sickness has become lethally epidemic in the last forty years.

I can tell you bugging is nothing to worry about. I’ve been tapped, surveilled, tailed for ten years. In Algeria everyone knew of at least three taps on all international calls — Algerian, French and C.I.A. The Algerians knew every move we made. That’s why they liked us. I was called in once by the Swiss Secret Service about some threats on my life. They offered me body guards. I looked at the chief agent and laughed. “Moi! Merci, non.” The agent laughed with me. “Professor, the Swiss police never sleep. We watch over you twenty-four hours a day.” Any real true intimate secrets are preserved in the tender codes of love. Privacy is woven with electric threads of contact that cannot be INTERCEPTED. Love has nothing to hide.

Secrecy is the original sin. Fig leaf in the Garden of Eden. The basic crime against love. The issue is fundamental. What a blessing that Watergate has been uncovered to teach us the primary lesson. The purpose of life is to receive, synthesize, and transmit energy. Communication fusion is the goal of life. Any star can tell you that. Communication is love. Secrecy, withholding the signal, hoarding, hiding, covering up the light is motivated by shame and fear, symptoms of the inability to love. Secrecy means that you think love is shameful and bad. Or that your nakedness is ugly. Or that you hide unloving, hostile feelings, Seed of paranoia and distrust.

Those who love have no need to hide their actions. As so often happens, the extreme wing is half right for the wrong reasons. They say primly: if you have done nothing wrong, you have no fear of being bugged. Exactly. But the logic goes both ways. Then F.B.I, files, and C.I.A. dossiers, and White House conversations should be open to all. Let every thing hang open. Let government be totally visible. The last, the very last people to hide their actions should be the police and government.

We operate on the assumption that everyone knows everything, anyway. There is nothing and no way to hide. This is the acid message. We’re all on cosmic T.V. every moment. We all play starring roles in the galactic broadcast: This Is Your Life. I remember the early days of neurological uncovering, desperately wondering where I could go to escape. Run home, hide under the bed, in the closet, in the bathroom? No way. The relentless camera “I” follows me everywhere. We can only keep secrets from ourselves.

And none of the legal experts get the point of Watergate. [Special prosecutor Archibald] Cox chasing leaks from his own staff.

I laugh at government bugging. Let the poor, deprived, bored creatures listen to our conversations, tape our laughter, study our transmissions. Maybe it will turn them on. Perhaps they’ll get the message our love-shine transmits: there is nothing to fear.

3 thoughts on “Secrecy is the original sin”