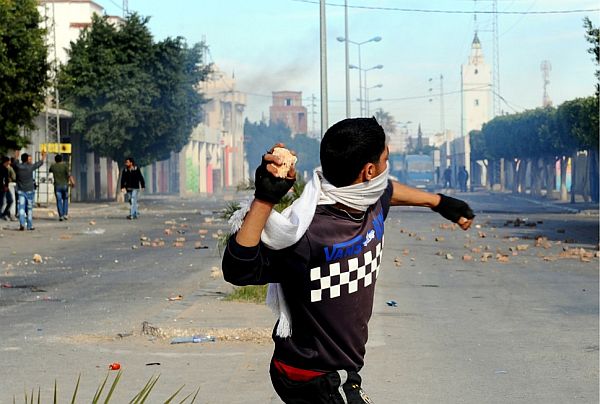 For observers throughout the Arab world, the significance of the Tunisian uprising is near-impossible to understate. During this era of retrenchment by aging descendants of revolutionary regimes, the prospect of democratic change had long-ago vanished as a believable possibility. The closest point of reference to the civil unrest in Tunisia is the protest movement that erupted in Iran following the contested presidential elections of June 2009. But the significance of Iran’s post-election events has been minimal in the Arab world, reflecting the Arab-Iranian cultural chasm and the ingrained sense of Arab chauvinism that guides Arab perceptions of international affairs. The Shiite theocracy established in the wake of the 1979 Iranian revolution has always been something of a curiosity for the Arab world and its heavily Sunni population. While the chimerical dreams of Arabism are long gone, events within the Arabic-speaking world – such as Tunisia’s protests – carry special resonance. Since Arab nationalism’s heyday under the 1950s and ’60s stewardship of Egyptian president Gamal ‘Abd al-Nasser, that collective identity has remained, held together by shared media and culture. The role once played by the radio broadcasts of Sawt al-‘Arab (Voice of the Arabs), the Egyptian-run radio station established during the Nasser era, is now filled by the saturation coverage of such Arab satellite stations as al-Jazeera and al-‘Arabiyya. The networks often focus on intra-Arab issues. The protests on the streets of Tunisia were seen far and wide, in real time, by millions of Arabs, with no need for translation or cultural filtering.

With Tunisia’s reputation as something of a stable but sleepy backwater, the events of recent weeks have come as a complete surprise to the world. The uprising remains in flux, its ultimate outcome unclear, and there is no certainty that the country is on its way to a democratic transition, let alone a smooth one. However, the demonstration effect of this uprising is likely not lost on the region’s aging autocrats. A pilot who refused to fly Ben Ali’s family out of Tunisia, interviewed on live television, explained that they were “war criminals.” As the region’s other autocratic rulers retire to bed, this forthright message will be a chilling reminder that their people’s quiescence is not guaranteed, nor is it the same thing as legitimacy. If nothing else, the protests have demonstrated that an Arab head-of-state can be toppled from below and, for leaders as well as activists, have expanded popular notions of the possible. While the U.S. invasion of Iraq and the protests of the “green movement” in Iran have had far-ranging regional ramifications, when it comes to promoting Arab democracy, Tunisia’s 2011 uprising may eclipse them both.

As much as democracy poses a threat to the Arab world’s autocratic leaders, it also threatens Israel. If a day ever comes that the Jewish state is surrounded by democracies, its real identity as a racist ethnocracy will be fully exposed.

4 thoughts on “Will Tunisia be a turning point for Arab democracy?”