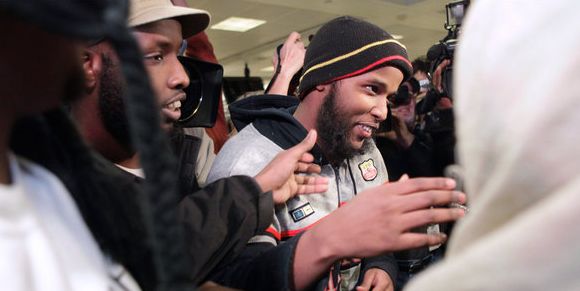 An American teenager, forced into temporary exile and then tortured in Kuwait– almost certainly with the knowledge of the Obama administration — has been freed.

A Northern Virginia teen who had been barred from flying home from Kuwait landed in Washington on Friday morning, four weeks after being detained, allegedly beaten by Kuwait authorities and questioned by FBI agents about possible terrorist connections.

Gulet Mohamed, dressed in a worn hooded sweat shirt and sweat pants, was embraced by his family after he arrived at Dulles International Airport, the end of an ordeal that he said had “made me stronger.”

The United States “is built upon fighting for your rights,” Mohamed, 19, said in an interview.

Civil liberties groups charge that his case is the latest episode in which the U.S. government has temporarily exiled U.S. citizens or legal residents so they can be questioned about possible terrorist links without legal counsel.

The American Civil Liberties Union is suing the U.S. government on behalf of 17 citizens or legal residents who were not allowed to board flights to, from or within the United States, presumably because, like Mohamed, they were on the government’s no-fly list. Of those stranded overseas, all were eventually told they could return, often after they agreed to speak to the FBI. None was arrested upon their return.

The ACLU suit, filed in Portland, Ore., alleges that Americans placed on the no-fly list are denied due process because there is no effective way to challenge their inclusion. The government does not acknowledge that any particular individual is on the no-fly list or its other watch lists. Nor will it reveal the exact criteria it uses to place people on its list.

The drone technology that has revolutionized warfare in Iraq, Afghanistan and Pakistan is entering the national airspace: Unmanned aircraft are patrolling the border with Mexico, searching for missing persons over difficult terrain, flying into hurricanes to collect weather data, photographing traffic accident scenes and tracking the spread of forest fires.

But the operation outside Austin [described at the beginning of this report] presaged what could prove to be one of the most far-reaching and potentially controversial uses of drones: as a new and relatively cheap surveillance tool in domestic law enforcement.

For now, the use of drones for high-risk operations is exceedingly rare. The Federal Aviation Administration – which controls the national airspace – requires the few police departments with drones to seek emergency authorization if they want to deploy one in an actual operation. Because of concerns about safety, it only occasionally grants permission.

But by 2013, the FAA expects to have formulated new rules that would allow police across the country to routinely fly lightweight, unarmed drones up to 400 feet above the ground – high enough for them to be largely invisible eyes in the sky.

2 thoughts on “The National Security State of America”