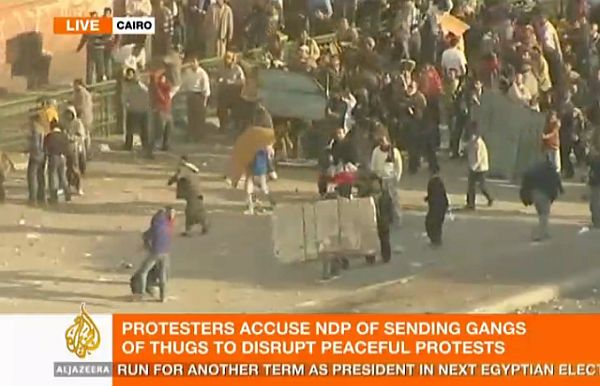 So much for President Obama’s ability to steer an orderly transition of power in Egypt. When he laid out his vision last night, it’s no wonder he had so little to say about Mubarak’s response. That Mubarak acknowledged the status quo is unsustainable and change must take place, said nothing about his intentions to realign the balance of power.

As the Egyptian president took the call from the White House, two facts must have been uppermost in his mind: the fact that preparations were already in place through which his thugs could unleash chaos on the streets, and the fact that he was being addressed by a spineless American president.

“I urge the [Egyptian] military to continue its efforts to help ensure that this time of change is peaceful,” Obama said last night. Well, as Al Jazeera is now showing, mayhem has been unleashed on the streets around Tahrir Square and the army has done nothing to intervene.

All those in the last few days who have warned about the dangers of mob rule should take note: the mob is on your side.