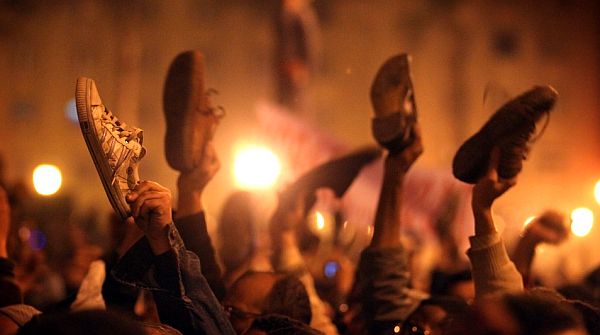 The New York Times, in its role as state storyteller, spins a fine yarn about how the White House artfully engineered Hosni Mubarak’s removal. A pivotal place in the narrative goes to “Frank G. Wisner, an adroit ex-diplomat whom President Obama had asked hours before to undertake a supremely delicate mission: nudging President Hosni Mubarak of Egypt out of power.”

“No one wanted it to seem as if we were pushing him out,” one administration official said. “That would not serve American interests. It was important for President Mubarak to make the decision.”

Two hours after Mr. Wisner’s plane left Andrews Air Force Base, White House officials sent an e-mail to more than a dozen foreign policy experts in Washington, asking them to come in for a meeting on Monday morning. “Apologies for the short notice in light of a very fluid situation,” the e-mail said.

The Roosevelt Room meeting, led by Benjamin Rhodes, the deputy national security adviser for strategic communications, and two other National Security Council officials, Daniel Shapiro and Samantha Power, examined unrest in the region, and the potential for the protests to spread, according to several attendees.

Significantly, during the meeting, White House staff members “made clear that they did not rule out engagement with the Muslim Brotherhood as part of an orderly process,” according to one attendee, who like others interviewed for this article spoke on condition of anonymity because he did not want to talk publicly about the meeting. The Muslim group had been suppressed by Mr. Mubarak, and Bush administration officials believed it was involved in terrorist activities. It renounced violence years ago.

“Orderly transition” is now the name of the game, but what remains unclear is whether Mubarak intends on sticking to the script.

After a half-hour conversation this evening, the only element of Mubarak’s thinking that Obama disclosed during his televised remarks was this: “He recognizes that the status quo is not sustainable and that a change must take place.”

That seems to leave open a wide range of possibilities — and one inconvenient fact: Mubarak is still Egypt’s president.

7 thoughts on “The first draft of an orderly transition”