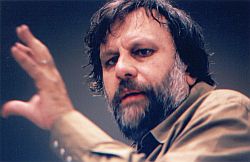 Many American academics and pundits from thinktankland should study the way Slavoj Žižek expresses himself. Passionate, emphatic, uninhibited, eccentric, and humorous — above all, a man who knows what it means to speak your mind. This is a display that shows that deep analysis does not need the protection of cover-your-ass-caveats or manicured sobriety. It can be an act of genuine self-expression.

The pre-condition though is that to speak your mind, you must know your mind and that is a dangerous enterprise.

In relation to Žižek’s central point — that the loss of the Left has come at a hefty price — it’s worth considering the pernicious influence of the sporting metaphor as it shapes American political thinking. Which is to say: the effect of the assumption that that which is defeated must by its nature be inferior; that those who lose are lesser. Guided by such thinking, we would have no reason to be concerned about the loss of species or the loss of cultures. As though the perfect condition would be one of victorious homogeneity.

And note: if democracy was by its nature something truly Western, would we now witness so much Western ambivalence about the birth of Egyptian democracy? On the contrary, the West’s ambivalence exposes the degree to which universal and socialist values have been marginalized in the West. As though we should have reason to doubt that human solidarity is a good thing.