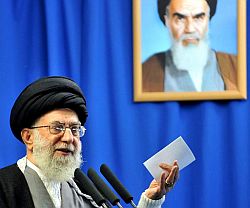 “The Iranian nation has become a model for the other nations through its resistance and insistence on Islam and Islamic establishment and due to the eye-catching progress it has made on this path throughout the last 32 years,” Ayatollah Khamenei said while addressing a military gathering in Tehran today.

But the Muslim Brotherhood is more interested in expressing its solidarity with its secular co-revolutionaries than its Iranian co-religionists. This isn’t an Islamic revolution, they say — stating the obvious. It’s an Egyptian revolution.

Ikhwanweb, the Muslim Brotherhood’s official English website editor in chief Khaled Hamza has stated that the current uprising in Egypt is a revolution of the Egyptian people and is by no means linked to any Islamic tendencies, despite allegations nor can it be described as Islamic.

Hamza stressed that the revolution is peaceful and calls solely for reform and a democratic civil state initiated by the youth through the social networking service Facebook and is far removed from any Islamist groups.

He criticized allegations and reiterations by some countries that the uprising was Islamic and denounced claims by the Iranian Supreme Leader Mr. Khamenai that the protests are a sign of an Islamic Awakening inspired by the 1979 Islamic Revolution in Iran.

Hamza maintained that the Egyptian protests are not an ‘Islamic’ uprising, but a mass protest against an unjust, autocratic regime which includes Egyptians from all walks of life and all religions and sects.

Anyone in any doubt about the difference between the Khamenei regime and the Muslim Brotherhood’s conservative and pragmatic political movment, should listen to the following from Dr Maha Azzam, Chatham House and Dr Shadi Hamid, Brookings Doha Center:

If in the first days of the Egyptian people’s uprising, the Mubarak regime imagined it could ride out the storm, two weeks later we can see that the revolution is, on the contrary, growing in strength. 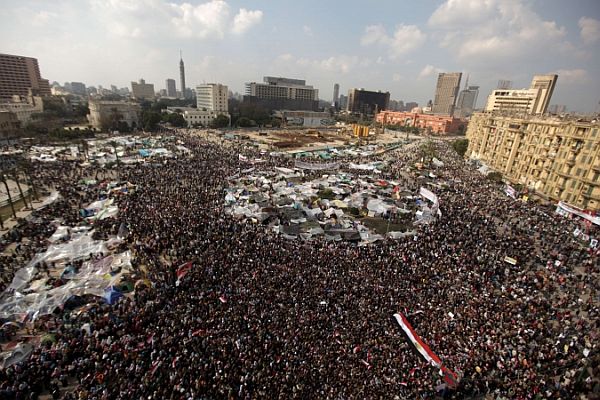 There is more energy and optimism in Tahrir today than almost anything I’ve seen before – an aimless wander through the packed crowds is a dizzying, exhilarating experience, revealing a hundreds of little micro-dramas playing out all over the square.

It’s so difficult to convey the atmosphere of this place through words or images; Tahrir may have dropped down the international media agenda somewhat in recent days, but honestly if you go down there and just stare around you – at the picnicking families, the raucous flag-wavers, the volunteer tea suppliers, the cheery human security cordons, the slumbering bodies curled up in the metal treads of the army’s tanks, the pro-change graffiti that adorns every placard, every tent, every wall space in vision – it’s impossible not to feel as moved as we all did in the very first days of this ongoing revolution.

As the streets appear safer and security more guaranteed, the numbers of those joining queues to enter Tahrir is growing, not falling – dozens told me today they were here for the first time. Politicking at the top may give the impression that the uprising has lost momentum, but clearly for many in Egypt it’s only just getting started.

An Al Jazeera report from Alexandria confirms the nationwide surge in demonstrations that has been driven by the impact of the Wael Ghonim interview broadcast on Egyptian television yesterday. The re-appearance of Ghonim — an activist leader and Google executive who was released from detention yesterday afternoon — “really had an impact on many Egyptians and forced a lot more to come out to the streets. This was the first time Egyptian television showed some of the most graphic images and stories that have happened over the last two weeks. So there’s definitely a surge in the number of pro-democracy, anti-government protests here in Alexandria,” said Jamal Elshayyal.