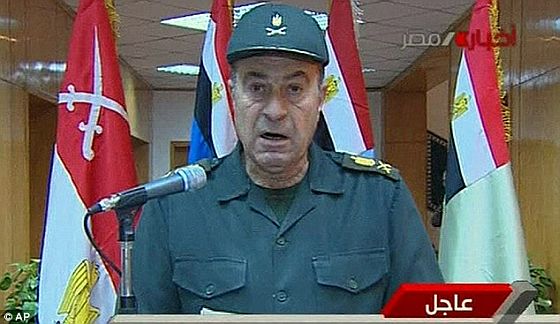 General Mohsen el-Fangari appearing on Egyptian TV to confirm the Supreme Military Council will take over running of the country.

Since Hosni Mubarak fled from Cairo, and even before then, some middle-class activists have been urging Egyptians, in the name of patriotism, to suspend their protests and return to work, singing some of the most ridiculous lullabies: “Let’s build a new Egypt”, “Let’s work harder than ever before”. They clearly do not know that Egyptians are already among the hardest working people in the world.

Those activists want us to trust Mubarak’s generals with the transition to democracy – the same junta that provided the backbone of his dictatorship over the past 30 years. And while I believe the supreme council of the armed forces, which received $1.3bn from the US in 2010, will eventually engineer the transition to a “civilian” government, I have no doubt it will be a government that guarantees the continuation of a system that never touches the army’s privileges, that keeps the armed forces as the institution that has the final say in politics, that guarantees Egypt continues to follow the much hated US foreign policy.

A civilian government should not be made up of cabinet members who have simply removed their military uniforms. A civilian government means one that fully represents the Egyptian people’s demands and desires without any intervention from the top brass. I think it will be very hard to accomplish this, if the junta allows it at all. The military has been the ruling institution in this country since 1952. Its leaders are part of the establishment. And while the young officers and soldiers are our allies, we cannot for one second lend our trust and confidence to the generals.

[A] clear divergence is emerging between the demands of the young men and women who brought down the Mubarak regime and the concessions – if that is what they are – that the army appears willing to grant them. A small rally at the side of Tahrir Square yesterday held up a series of demands which included the suspension of Mubarak’s old emergency law and freedom for political prisoners. The army has promised to drop the emergency legislation “at the right opportunity”, but as long as it remains in force, it gives the military as much power to ban all protests and demonstrations as Mubarak possessed; which is one reason why those little battles broke out between the army and the people in the square yesterday.

As for the freeing of political prisoners, the military has remained suspiciously silent. Is this because there are prisoners who know too much about the army’s involvement in the previous regime? Or because escaped and newly liberated prisoners are returning to Cairo and Alexandria from desert camps with terrible stories of torture and executions by – so they say – military personnel. An Egyptian army officer known to ‘The Independent’ insisted yesterday that the desert prisons were run by military intelligence units who worked for the interior ministry – not for the ministry of defence.

As for the top echelons of the state security police who ordered their men – and their faithful ‘baltagi’ plain-clothes thugs — to attack peaceful demonstrators during the first week of the revolution, they appear to have taken the usual flight to freedom in the Arab Gulf. According to an officer in the Cairo police criminal investigation department whom I spoke to yesterday, all the officers responsible for the violence which left well over 300 Egyptians dead have fled Egypt with their families for the emirate of Abu Dhabi. The criminals who were paid by the cops to beat the protesters have gone to ground – who knows when their services might next be required? – while the middle-ranking police officers wait for justice to take its course against them. If indeed it does.

In mid-December, Sarah A. Topol described the extent to which the military controls Egypt’s economy.

The Egyptian military manufactures everything from bottled water, olive oil, pipes, electric cables, and heaters to roads through different military-controlled enterprises. It runs hotels and construction companies and owns large plots of land.

The Egyptian military has “an enormous vested interest in the way things run in Egypt, and you could, I think, be sure that they’ll try to protect those interests,” a Western diplomat in Cairo told me. “There’s a certain conventional wisdom [that] therefore the next president has to come from the military. I don’t know that that’s true. It’s the interest that they’ll be interested in protecting.”

But reporting on the military is difficult. No one wants to talk about the subject, and people who are willing to talk don’t want their names used. If civilians are worried, Egyptian journalists are petrified. “There is Law 313, [passed in] the year 1956, and it bans you from writing about the army,” Hesham Kassem, an independent publisher, told me. “It’s the taboo of journalism.”

Three days after Hosni Mubarak’s resignation, Egypt’s political opposition was bitterly divided over its next moves as the army expanded its near-total control over the country with no overt signs that it’s included anti-government protesters in its decision-making.

A major meeting of opposition leaders and protesters on Monday quickly devolved into arguments and diatribes, underscoring how difficult it will be for the diverse, leaderless revolutionary movement to coalesce around a political platform before elections that Egypt’s military caretakers have pledged to hold.

While one set of opposition figures battled itself, a group of seven young, middle-class democracy activists said that they’d met with senior members of the Supreme Council of the Armed Forces. The protesters said the generals voiced their “sincere intention to preserve the gains of the revolution.”

But the army, which Friday took power from Mubarak and since has issued only brief statements of its plans for the transition to a democratically elected government, made no mention of the meeting in its only statement of the day — a call for an end to growing labor protests.

The army has met some of the key demands of the protesters who ousted Mubarak. It’s dissolved his rubber-stamp parliament and suspended the flawed constitution. Many Egyptians consider the military the country’s most credible public institution after it remained neutral during the 18-day popular uprising and refused to fire on protesters.

But the military leadership — which includes former members of the Mubarak regime and is headed by his defense minister, Field Marshal Mohamed Hussein Tantawi — so far has emphasized stability over transparency.