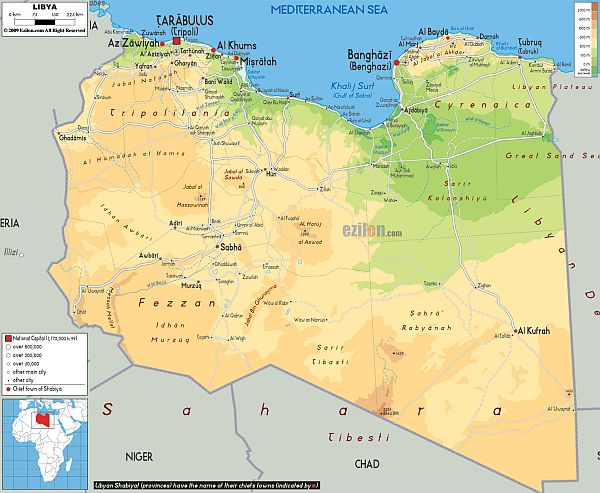 Libya is essentially a desert, with the only areas that can support intensive residence located in the Jefara Plain, around Tripoli in Tripolitania, and the Jabal al-Akhdar behind Benghazi in Cyrenaica.

The result has been that Libya’s six million-strong population, as a result of oil-fired economic development in the rentier state that emerged at the end of the 1960s, is now highly urbanised and largely concentrated in these two cities and the satellite towns around them.

This means that any regime which loses control of them has lost control of the country, even if it controls all outlying areas, such as the oil fields in the Gulf of Sirt between them, which is also the home base of the Qadhadhfa, or the Fezzan that still seems to be loyal to the Gaddafi regime.

It is this that explains how, once the army in Benghazi changed sides, the regime lost control of Eastern Libya and why its hold on Tripoli, the capital, has been so rapidly contested.

Nor should the nature of the regime or the Gaddafi family be ignored as a factor for the collapse. The regime has, in recent years, benefited from growing foreign investment in Libya, alongside its massive oil revenues, after sanctions in connection with the Lockerbie affairs were removed in 1999.

As foreign economic interest grew, so did corruption and, although Colonel Gaddafi himself may not have been corrupt, his seven sons and one daughter certainly were, drawing their fortunes from commissions and income streams siphoned off from the oil-and-gas sector.

Libyans themselves have been excluded from the benefits of oil wealth for decades, so the blatant corruption inflamed their resentment in recent years.

In addition, the Libyan leader, who had no formal role inside the jamahiriyah but made sure that the Revolutionary Committee Movement answered only to him, has played on the aspirations of his sons to succeed him, pitting one against the other to ensure that none of them could amass sufficient power to threaten his position.

In such an atmosphere of eternal mistrust and suspicion, it is hardly surprising that the ultimate bastion of the regime has been the “foreign mercenaries” that have terrified Libyans with their indiscriminate violence during the country’s latest revolution.

Yet, they too form part of the leader’s conception of the state. In the 1980s, Libya opened its borders to all who were Muslim, as part of its vision of Arab nationalism and Islamic radicalism.

The regime also recruited an “Islamic Legion” to aid it in its foreign adventures, particularly in Africa, as Chad, Uganda and Tanzania were to discover.

In 1997, Libya also renounced its self-image as an Arab state, prioritising its African destiny instead, opening its borders to sub-Saharan Africa, despite the intense domestic tensions that the inflow of migrants generated, which resulted in riots and deaths in September 2000.

Now, apart from using African migrants as a tool to coerce European states such as Italy with the threat of uncontrolled migration, it has also recruited them into its elite forces around the “Deterrent Battalion” (the 32nd Brigade) which are used solely for internal repression.

They have no loyalty to Libyans who hate them and they are the forces on which Colonel Gaddafi relies to ensure that his regime ends in a bloodbath to punish Libyans for their disloyalty to his political vision.

Whatever the Colonel thinks – and it is what he thinks that determines the struggle inside Libya today – there are objective factors that will determine the outcome.

Unrest in Western Libya has already led to towns in the Jefara Plain falling to the widening anti-regime movement. Zuwara is said to have been taken over by them and major struggles are taking place between armed forces loyal to the Gaddafi regime and the inchoate movement opposed to it in Misurata and Zawiya, where helicopter gunships seem to have been used.

Even if Tripoli is still under regime control, the towns surrounding it seem to be slipping away. Eventually, the leader will control only the capital and nothing else. 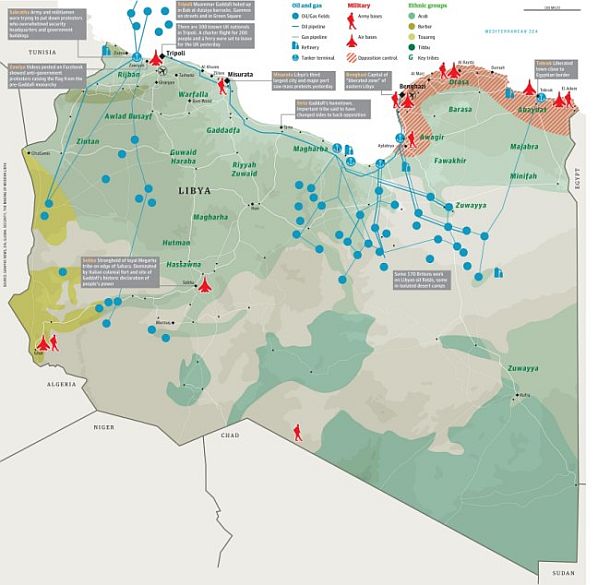