The Economist’s index of unrest in the Arab world 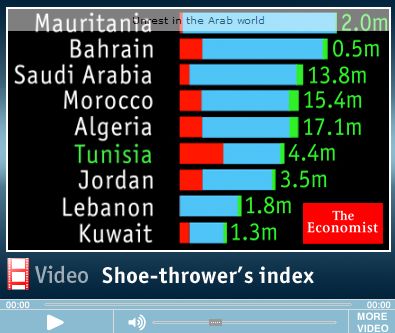 He was speaking at a news conference in Tunis, after making a lengthy speech defending his record in government.

Mr Ghannouchi is seen as being too close to former President Zine al-Abidine Ben Ali, who was toppled in an uprising last month. (BBC)

Three people killed as demonstrations turn deadly in Tunisia
Protests in Tunisia turned violent and deadly Saturday, just over six weeks after a popular uprising forced the president out of office, and lit a spark of desire for democratic reform in parts of Africa and the Middle East.

Three people were killed Saturday and nine others injured during mayhem in the capital, Tunis, according to a Interior Ministry statement cited by the state-run news agency, Tunis Afrique Presse (TAP).

More than 100 people were arrested, the ministry said, in the area around Habib Bourguiba Avenue, in the city’s center, accused of “acts of destruction and burning.” (CNN)

“The police shot them because they burned shops and cars in Sohar,” Rshid said. Another source said it was rubber bullets that the police fired. A number of police had also reportedly been injured, but numbers were not confirmed. (CNN)

In Bahrain, Sunni activist’s plight seen as a cautionary tale
Mohamed Albuflasa was different from everyone else taking the stage on the second day of Bahrain’s protests. He was a Sunni Muslim.

The 34-year-old Salafist favored government reform, and he believed he should speak at the rally to promote unity among the country’s Shiite Muslim majority and Sunnis at Manama’s Pearl Square.

Within hours, a security agency had detained him, and he has not been seen since. Even as hundreds of political prisoners were freed this week by King Hamed ibn Isa Khalifa, Albuflasa remains jailed and his whereabouts a mystery.

“Mohamed’s speech was meant to reduce the fire going on where people create differences between Shiites and Sunnis. He was there to show there is no difference between them. We are all Bahraini,” his brother, Rashid, told The Times this week. “He is not against the royal family and government.” (Los Angeles Times)