The defense of Brega
From the feeble cover of sand dunes, under assault from a warplane overhead and heavy artillery from a hill, rebels in this strategic oil city repelled an attack by hundreds of Col. Muammar el-Qaddafi’s fighters on Wednesday. The daylong battle was the first major incursion by the colonel’s forces in the rebel-held east of the country since the Libyan uprising began. 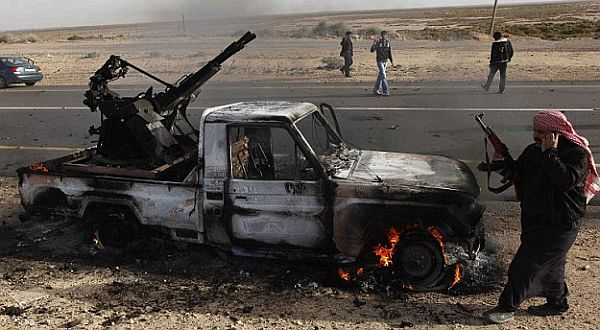 The battle began at daybreak, when government fighters stormed the airport and the area around the city’s oil refinery. By the early afternoon, hundreds of men from this city, wielding Kalashnikov rifles and knives — joined by confederates from neighboring cities with heavier artillery — fought Colonel Qaddafi’s men, who were backed by air power and mortars.

But as night fell, the government fighters were on the run and the rebels were celebrating in Brega and all along the road north to Benghazi, the seat of rebel power, where fireworks lighted up the sky.

The attack seemed to spearhead a broader effort by the government of Colonel Qaddafi to reassert control over strategic oil assets in the eastern part of the country, which have been seized by rebel forces. And what appeared to be a victory by the rebels continued a string of recent successes in beating back those attacks, as they did in the western city of Zawiyah earlier this week. But the rebels have not been able to shake the colonel’s hold on power.

That quandary was apparent as the fighters celebrated their victory in a Brega square: the warplane reappeared and attacked the gathering.

“Yes, they won,” said Iman Bugaighis, a spokeswoman for the rebel governing authority, which asked Western nations to conduct airstrikes against Colonel Qaddafi’s strongholds on Wednesday. “We don’t know how long it will last. He’s getting stronger.” (New York Times)

The interim council had indicated it won’t negotiate with Qaddafi, the Benghazi-based newspaper said on its website. Benghazi, the biggest city in eastern Libya, has fallen under the rule of Qaddafi’s foes who are pushing to end his four- decade rule.

Fierce battles rage in Libya
Forces loyal to Muammar Gaddafi, the Libyan leader, are reported to have regained control of two strategic towns in the country’s northwest, even as opposition fighters in the east prepare to march on the capital, Tripoli.

The claims about the fall of Gharyan and Sabratha on Wednesday came as fighting raged between pro- and anti-government forces over the control of the eastern town of Brega, the headquarters of several oil companies, and Gaddafi appeared on state television once again.

“They tried to take Brega this morning, but they failed,” Mustafa Gheriani, a spokesman for the February 17th Coalition, an anti-government group, told the Reuters news agency.

“It is back in the hands of the revolutionaries. He is trying to create all kinds of psychological warfare to keep these cities on edge.” (Al Jazeera)

Gaddafi: Libya dignity under attack
Libyan leader Muammar Gaddafi has said that he is not a president and so cannot resign his position, and that power is in the hands of the people, during a televised public rally in the capital, Tripoli.

“Muammar Gaddafi is not a president to resign, he does not even have a parliament to dissolve,” Gaddafi said on Wednesday, his third pu8blic appearance since the uprising, surrounded by dozens of supporters in a large ballroom for a ceremony to mark 34 years of “people power”.

“Attacks on me are seen by Libyan people as attacks on their symbol and dignity.

He said that the world did not understand the Libyan system that puts power in the hands of the people. (Al Jazeera)

Libya’s toxic tribal divisions are greater than Qaddafi
Col Qaddafi’s main support comes from three major sources: the Warfalla, based 180km southwest of Tripoli, the largest tribe in the country with large communities within Tripoli. The Warfalla also comprise a majority of well-educated Libyans. Gaddafi’s own tribe, centred in Sirte, 500km east of Tripoli, is another pillar of his support. The allegiance between Gaddafi’s tribe, Gaddafa, and the Warfalla has been described as a “blood link”. Their ties predate Col Qaddafi’s rise to power and will be slow to change now. Prejudice against other tribes in Libya, particularly against the Misrata, make many Warfalla more hardline than Col Qaddafi himself.

Sizeable support for Col Qaddafi still exists within these two tribes, which form a triangle with the Mediterranean as its base, that points deep into Libya’s south, where Col Qaddafi also draws sizable support. Sebha, for instance, the capital of Libya’s southern region, has not seen any demonstrations so far.

This tribal landscape must be understood along with Libya’s recent history: the country has not had political parties for more than four decades. Civil society does not exist, nor does the idea of loyalty to the “state”. There is not a constitution, no nationally-accepted rule of law and no practical mechanisms to guide the country in the event of a power vacuum at the top. Col Qaddafi himself emphasises the fact that he has neither “official role” nor “legally binding responsibility”.

This structure makes it hard to see how a power vacuum could be filled and by whom. While the eastern part of Libya is beyond government control it still lacks effective leadership, let alone a clear political vision for a united Libya. The only strong message and symbol coming from eastern Libya is the flag of the country from the 1950s that is being waved by protesters. The two most viable scenarios for Libya in the long-term, however, are a country vulnerable to further division or all-out tribal war. (Mustafa Fetouri)

UN warcrimes court to name Libyan suspects
The chief prosecutor of the International Criminal Court on Thursday will name individuals to be targeted in a full-scale probe of alleged crimes committed in Libya, his office announced.

Luis Moreno-Ocampo will announce “the opening of an investigation in Libya” at a press conference in The Hague on Thursday and present “preliminary information as to the entities and persons who could be prosecuted”, it added.

The prosecutor will “put them on notice to avoid future crimes” and would also present an overview of the alleged crimes committed in Libya since an anti-government rebellion started on February 15, the statement noted.

Hundreds of people have been killed in a violent crackdown on the uprising and tens of thousands are fleeing the country, causing a humanitarian emergency. (AFP)

Europe to help Libya stranded
The governments of France, Spain and Britain have said they would evacuate thousands of workers stranded on the Tunisian border after fleeing the violence in Libya.

Emergency airlifts along Libya’s borders were launched on Wednesday, as more than 140,000 refugees pour into Tunisia and Egypt from Libya and thousands more are arriving by the day.

UN experts warned that fast action was needed to protect and feed them before the exodus turned into a full-blown humanitarian crisis.

Many of the foreigners are from countries that could not afford evacuations, or sub-Saharan African workers whose lives are in danger because they are being mistaken for mercenaries hired by Libyan leader Muammar Gaddafi. (Al Jazeera)