Security forces have used teargas and live ammunition to disperse hundreds of anti-government protesters who marched in Tripoli after prayers.

Several hundred demonstrators gathered in Tajura, an area east of the capital, chanting: “Gaddafi is the enemy of God.”

Protesters tore down posters of the Libyan leader and spraypainted walls with graffiti reading: “Down with Gaddafi” and “Tajura will dig your grave.”

Scores of police cars descended on the area, forcing journalists from the scene, and at least one person was detained.

Soon after the march began, officers fired teargas at the crowd. The protesters scattered, but quickly regrouped before security forces fired live ammunition, scattering the protesters again. It was not immediately clear if the shots had been fired in the air or at the marchers.

Libya unrest: the civil war begins — an interactive map in The Guardian (click image below): 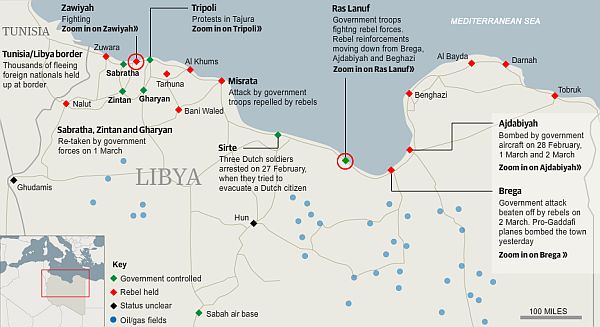 On Wednesday, Libyan leader Qaddafi’s warplanes bombarded opposition-held Ajdabia, a coastal town 175 km south of Benghazi, the eastern city that has become the unofficial headquarters of anti-Qaddafi forces. That same day, Qaddafi also sent mercenaries to attack the oil-rich town of Brega, 80 km to the southwest, where fighting left 17 dead and, according to some reports, eight more dragged off by mercenaries to an unknown fate. Though fighting between the regime and the opposition has raged openly in Tripoli for the past week, these attacks brought Qaddafi’s first overt hostilities against the rebel-controlled east of the country since yellow-hatted mercenaries massacred civilian protesters in Benghazi on February 17th.

Since ousting Qaddafi’s forces and seizing control over much of eastern Libya on February 21, civilians and defectors from Qaddafi’s army have been gathering in military camps in Benghazi, receiving training from former officers, arming themselves with weapons taken from now-abandoned depots, and preparing for the inevitable counterattack, which began two days ago. That morning, the nascent rebel force mobilized., Many in Ajdabia and elsewhere had received phone calls from friends and family in Brega, which they said was under attack. Newly trained and ready to fight, thousands of these volunteers sped down to help. Ultimately, this irregular force managed to hold the town. Victorious, many returned to the military camp in Ajdabia that evening.

A 26-year-old pharmacist and volunteer in the uprising who gave his name only as Mohammed, sped down the highway toward Ajdabia on Wednesday night. Also in his car was Abdallah Kamal, an Egyptian who participated in the uprising in Cairo’s Tahrir Square, as well as myself and another foreign journalist along for the ride. The road’s checkpoints were marked with burning tires and manned by young men sporting Kalashnikovs and kaffiyehs wrapped around their heads.

5 thoughts on “The fight for Libya”