As the controversial 443 highway, which connects Tel Aviv with Jerusalem by passing through the West Bank, begins to curve toward Israel’s capital, the eye is inevitably drawn to an imposing gray structure with massive concrete walls, part of the Ofer Military Prison. Commuters are barely aware of what takes place behind those walls, and that’s no accident—the Ofer compound, comprising a military court, detention center and prison, is just one of many black holes that enable Israelis to go on with their daily lives, unaware of the everyday realities of the occupation. 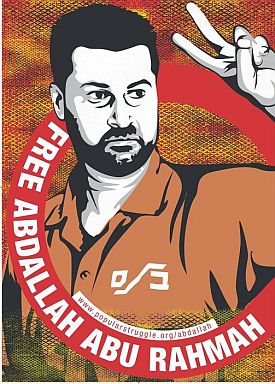 Inside, a man in shackles enters the courtroom. He is wearing a brown prison suit, and his exhausted eyes exchange glances with his wife. The two haven’t met outside the courtroom in more than a year, and for some reason the prison guards are frantically moving the wife so she doesn’t sit too close to her husband, who is officially a “security risk.” Soon the military judge, outfitted in a light green Israel Defense Forces (IDF) uniform and an army beret, enters the room and begins the proceedings.

This trial could be any one of the thousands that have taken place at Ofer. Israeli military justice is swift and unflinching: according to the Israeli human rights organization Yesh Din, the conviction rate at Ofer is an astounding 99.7 percent. Hearings are short, and apart from relatives who use the opportunity to see their loved ones, nobody bothers to attend or report on the proceedings. But today is different. The small courtroom is full, with twenty European diplomats—including the British general consul, Sir Vincent Fean—as well as a handful of Israelis who have become close to the prisoner through years of joint action.

The prisoner, Abdallah Abu Rahmah, a 39-year-old schoolteacher and father of three, has already been convicted and has served a sentence for incitement and organizing illegal protests in the West Bank village of Bil’in. But after a prosecutor’s appeal, the judge ordered that he be kept in prison. Abu Rahmah would later receive an additional six months of prison time.

It wasn’t only friendship that brought the Israelis to Ofer. They see the case against Abu Rahmah as part of a new effort to crush unarmed resistance in the West Bank. For them, Abu Rahmah is not just another Palestinian activist. By leading the mostly nonviolent weekly protests in his village against Israel’s separation wall, he has become the face of a new uprising against the occupation and a key player in a kind of activism that has united Jews, Palestinians and people from around the world—one that carries a message of hope, something as unusual and unexpected in this part of the world as the recent uprisings that have toppled Arab tyrannies. It is a hope that can even penetrate the forbidding walls of the Ofer military compound.

3 thoughts on “The new Israeli Left”