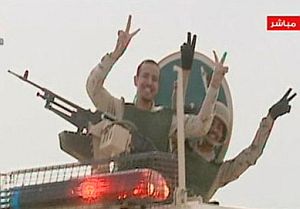 The international community is taking weeks to decide whether to impose a no-fly zone over Libya. Meanwhile, in the eerie quiet of a Bahraini afternoon a deployment of 1,000 soldiers from the Saudi Arabia who are part of the Pensinsula Shield Force entered the country.

Bahrain TV proudly aired clips showing cheering Saudi soldiers in their tanks and armoured personnel carriers as they rolled across the 16-mile causeway between the two countries. Tellingly, a man at the parapet of a tank sits behind his machine gun waving a peace sign at the camera. This is a snapshot of the regime’s current strategy, smile sweetly and say peace for the cameras – and bring in the big guns.

While pro-government commentators allege Iranian support of the current uprising, US defence secretary Robert Gates, who visited Bahrain on March 12, said there is no evidence of interference from Tehran. Unsurprisingly though, the White House issued a statement on Monday saying it does not consider the entry of Saudi troops on to Bahraini land an invasion.

Since the beginning of this uprising – which calls for constitutional reform, an investigation into theft of public land worth billions of dollars, and an end to systematic discrimination, among other things – the regime has implemented a soft-talk big-stick strategy. Its security personnel killed two protesters, and the king appeared on national television to speak of his regret, promising an independent investigation to hold those responsible accountable. Two days later, government security personnel stormed the encampment of protesters at the now-famous Pearl roundabout, killing four more. Later the same day, the crown prince appeared on TV urging calm, while the Bahraini army opened fire on unarmed demonstrators, killing another two.

The government then said it was open to dialogue with protesters (who are understandably sceptical). Distrust of the government emerges from a history of state oppression and reneged promises much longer than this long month of protest in Bahrain.

Our mothers and fathers, teachers, lawyers, activists and unionists were among the people of Bahrain who expressed their social and political grievances and desires for change in 1954, 1965, 1972, 1994, and 2002. The response of the government has always been the same: unleashing violence against calls for meaningful change, exaggerating the superficial self-imposed changes which include little concession towards sharing of power, and turning to its powerful friends for backing.

Frenzied clashes swept Bahrain Tuesday, a day after a Saudi-led military force entered the country to defend its Sunni monarchy from a Shiite-led protest movement. Hundreds of demonstrators were injured by shotgun blasts and clubs, a doctor said.

As the government’s crackdown intensified, the Bahraini king declared a three-month state of emergency Tuesday that gave his military chief wide authority to battle protesters demanding political reforms and equal rights for Shiites. One demonstrator was shot in the head and killed, and a Saudi official said one of his country’s soldiers was shot dead by a protester.

The force of more than 1,000 Saudi-led troops from several Gulf nations saw its first day of action to help prop up the U.S.-backed regime in Bahrain. Its intervention was the first major cross-border military action to challenge one of the revolts sweeping across the Arab world.

Not surprisingly, the claim by the Saudi official cited in the AP report turned out to be false.

A member of Bahrain’s security forces was killed on Tuesday in clashes with thousands of protesters, state television and the information ministry said, denying earlier reports that a Saudi policeman had also died.

“A member of the security forces passed away in Maameer this evening when he was deliberately run over by one of the rioters,” Bahrain’s Ministry of Information said.

And maybe the story will change yet again and we’ll learn that the vehicle involved was one of the security services’ own.

Amnesty International has called on the Bahrain authorities to hold security forces accountable over the use of excessive force after police fired rubber bullets at close range at demonstrators in the capital Manama.

Hundreds of protesters are reported to have been injured over the weekend. On Friday, anti-government protesters sought to march to the royal palace in Riffa but were blocked by security forces and armed government supporters.

On Sunday, police used batons and fired tear gas and rubber bullets at protesters who sought to block Manama’s financial district and demonstrated at Bahrain University.

The disturbances were the first major violence since Crown Prince Salman bin Hamad al-Khalifa ordered the military off the streets nearly three weeks ago.

“This further resort to excessive force by Bahrain’s security forces is alarming and unacceptable,” said Malcolm Smart, Amnesty International’s Director for the Middle East and North Africa. “The government must now rein in its forces. Those responsible for attacking peaceful protestors and using excessive force must be held to account.”