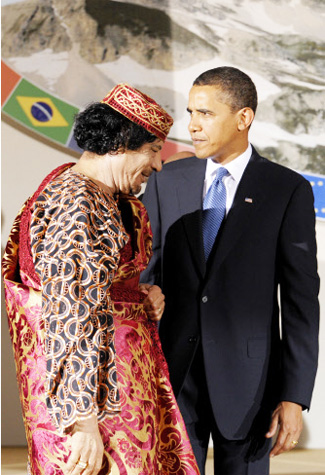 If Sarkozy, Cameron and Obama believe that Gaddafi’s demonization makes the war legitimate in the eyes of domestic audiences which might otherwise lack interest in the fate of Libya, the West will have needlessly restricted the range of acceptable outcomes to this war.

Even at this point, there should be some effort to open up as many exit methods possible both for the Libyan leader and those around him. If Gaddafi’s only options are to cling to power or be killed, he will without doubt fight to the finish. If he can be convinced he won’t win he also needs to be enticed by the credible possibility that there remains a way out — one that’s more appealing than facing trial in The Hague.

Gaddafi is too vain to be serious about martyrdom. I don’t believe he is ready to die, and if that is indeed the case then his desire to live should be seen as an advantage that his adversaries should exploit.

Simon Tisdall focuses on the implications of the expressions of personal animosity that the war’s Western leaders are directing at Muammar Gaddafi.

Now the missiles and B52s have begun their dreadful work, Gaddafi knows, if he didn’t already, that he’s in a fight to the finish – and for him, there may be no escape. His course of action in the coming days will be influenced by this realisation, and may be consequently more extreme and more aggressive than otherwise.

His defiant overnight statement, when he condemned the “crusader colonialism” afflicting his country, was clearly aimed at Arab and Muslim world opinion in particular, and the non-western world in general (major countries such as China, India, Brazil and Germany have not supported the intervention). Regime claims about mounting civilian deaths will play big there, Iraq-style. Gaddafi will press his propaganda advantage for all its worth.

The demonisation of Gaddafi has made it impossible for western leaders to countenance his continuation in power. But without the ground invasion they have pledged not to undertake, he could well survive as the overlord of western and southern Libya following a de facto partition, hostile, vengeful and highly dangerous.

This seems to be his plan. Far from giving up or drawing back, Gaddafi escalated the fighting around Benghazi at the weekend. Rather than abandon cities such as Zawiya, as Obama demanded, he is reportedly moving his troops into urban areas where they can less easily be targeted from the air. Meanwhile, his apparent willingness to use “human shields”, his threats of retaliation across the Mediterranean area, and his designation of the whole of north Africa as a “war zone” raises the spectre of possible terrorist attacks and an alarming regression to his old ways.

Gaddafi has personalised this war, too. And he is not going to go quietly. Military superiority in the air will count for nothing if pro-regime army and air force units, militia and security forces, and civilian and tribal supporters who have remained loyal refuse to turn on him or kick him out of Tripoli. By its determination to “get Gaddafi”, the west has made this a fight to the death – and death may be a long time in coming.

Benghazi woke on Saturday morning to discover that its wild celebrations over the UN security council’s declaration and Gaddafi’s calling of a ceasefire on Friday were premature. Residents had imagined the city was saved by the west’s threat of air strikes unless Gaddafi halted his attacks on Libya’s rebellious towns.

But at dawn the dictator’s army was fighting its way into the country’s second-largest city of about 700,000 people using rockets and tanks.

As the shells fell, rattling nerves and buildings, a single question emerged time and again. On occasions it was delivered as a baffled plea by middle-aged men gathered on Benghazi’s seafront as they anxiously awaited the latest word on the fighting. At other times, the question was shouted in anger by young men manning the barricades and facing the threatened onslaught with Kalashnikovs and petrol bombs.

“Where are the air strikes? Why is the west waiting until it is too late?” asked Khalid el-Samad, a 27-year-old chemical engineer, who shook his finger in fury. “Sarkozy said it. Obama said it. Gaddafi must stop. So why do they do nothing? Is it just talk while we die?”

Benghazi reeled in shock as the rebels initially fell back and then fought hard to contain the assault while artillery fire rocked parts of the city for much of the day.

Dozens of people were killed, among them the civilians the UN resolution was pledged to protect, and hospitals treated an even larger number wounded. As the fighting intensified, thousands fled east towards the Egyptian border in cars, pick-up trucks and buses crammed with people and what was most precious or essential – bedding and cooking pots.

Alongside the angry questions over the lack of air strikes was bafflement that the western powers had apparently been duped into believing Gaddafi’s false promise of a ceasefire that bought him time to launch the assault on Benghazi by delaying military action French officials had suggested was imminent.

“In 42 years we learned never to trust Gaddafi,” said Hassan Khalafa, an accountant carrying a Kalashnikov at a checkpoint near the former court that serves as the revolutionary government’s headquarters. “He always lies. The only time he told the truth is when he said he will kill all of us in Benghazi. France and America and the UN have been fooled by him.”

As dusk settled, Gaddafi’s gamble appeared to have failed. In the face of rebel resistance, his army pulled back only to be hit a few hours later by the air strikes. But by then, it was clear that the people of Benghazi will not feel safe until the man who has controlled their country for 42 years is overthrown.

Gaddafi’s prophetic declaration? “All tryants fall under the feet of the people.”