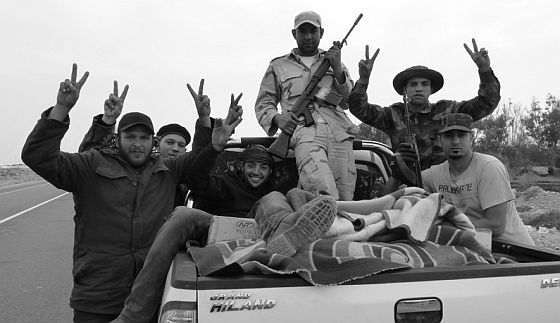 'And what kind of training did you get when you joined the rebels?' 'Training?' He laughed. 'Man, I just watched someone else and figured it out on my own.'

Ryan Calder is a PhD candidate from Berkeley, California, currently in Libya doing field research on the uprisings of the 2011 Arab Spring.

What caused the Libyan revolution of 2011? This is the “big question” that motivates my research. At one level, the answers are simple. The Qaddafi regime has been in power for four decades. Most Libyans are tired of its oppression, and of the way it channels economic resources and opportunities to Qaddafi loyalists. With Tunisia and Egypt as inspiration, young, Facebook-using Libyans organized peaceful demonstrations on February 17. After the regime responded with bullets, a revolution began.

That’s the straightforward narrative. It is, I believe, correct. But it doesn’t tell the full story. Many people around the world live under oppressive and corrupt governments, but most of them don’t launch revolutions. Moreover, it’s one thing to protest — as people are doing across the Arab world this year — but it’s quite another to mobilize an armed revolution against a government that has had an iron grip on power for 41 years, with tens of thousands putting their lives at risk.

Why has the Libyan revolution of 2011 has unfolded the way it has? Why now? What concerns do ordinary Libyans have? How do they see the world? Who are the people willing to put their lives on the line to get rid of Qaddafi? Why do some Libyans remain loyal to the Qaddafi government? And what factors might determine whether this revolt succeeds? To answer such questions, we need a textured understanding of Libyan society in 2011, and of the way revolutions happen in the age of Facebook, satellite TV, and mass media. That’s why I’m here.

In one of Ryan’s most recent posts, he describes what has made this an “accordion war” in which day by day, the front swings west and east as the small oil towns west of Benghazi have been repeatedly and quickly liberated by rebels and then just as quickly retaken by Gaddafi forces.

The fact that the young men in this revolution are now most often referred to as “rebels” obscures the fact that this was and remains a civilian uprising. Most of these men have probably had less experience handling and using weapons than the average gun-owning American. And some of these “rebels” don’t even have guns!

Although they contain a few well-trained military units such as Al-Sa’iqah (the special forces who joined the opposition in Benghazi), the vast majority of the rebels are civilians with no military training whatsoever. “I’d never fired a gun in my life before this revolution,” one 25-year-old fighter from Al-Marj told me. “If Gaddafi found you with so much as a bullet, he’d throw you in jail.”

Those rebels fighting at the front don’t even receive military training before they go. “How’d you learn to use that thing?” I asked one 38-year-old engineer I met in Ras Lanuf carrying a Kalashnikov. “And what kind of training did you get when you joined the rebels?”

“Training?” He laughed. “Man, I just watched someone else and figured it out on my own.”

Right now, there’s no military apparatus outside Tripoli with the organizational capacity to train the rebels anyway.

“And where did you go to enlist?” I asked.

He laughed again. “There’s no enlisting. You just find a weapon and show up at the front. If you don’t have one, you wait until another rebel dies and you take his. Or you get some off of Gaddafi’s dead soldiers.” Indeed, I’ve seen groups of rebels scouring the remains of Gaddafi’s bombed-out tanks and armored personnel carriers along the coastal highway, looking for usable weapons and ammunition.

Later, Khalid, a 39-year-old bakery owner from Benghazi who makes a mean bowl of bean soup, showed me his Russian-made Kalashnikov. It was made in 1976.

So what are the ragtag rebels and their outdated weaponry good for? In particular situations – such as street battles within Benghazi against Gaddafi’s Al-Fadil Brigade, or in occasional skirmishes with the Revolutionary Committees – these ragtag fighters have proven effective on an individual level. Many have demonstrated incredible courage, such as Mahdi Ziu, an overweight father of two who loaded his own car with propane and drove it into a heavily defended gate to save his comrades’ lives and help take the main military base in Benghazi. Everyone in Benghazi remembers Mahdi as a hero.

But I’ve seen rebels hightailing it too. A few days ago, at the front 20 km east of Brega, I was interviewing Faraj, a 19-year-old unemployed rebel who lives at home with his parents. He didn’t appear to be armed.

“Do you even have a gun?” I asked. “Yeah – well, you know how it is. There’s about one Kalashnikov for every four or five of us rebels,” he said. “Mine’s in the car.”

We heard one shell land several miles away. A column of black smoke rose slowly.

Faraj and his comrades jumped in their cars and fled, even before the gang of foreign photographers with me stopped clicking their shutters.

The rebels’ rapid retreat is not so much a function of cowardice, but of the fact that when Gaddafi’s shells begin falling, there’s not much they can do. Word on the street here is that even the best of the rebels’ artillery can travel only 20 km, whereas Gaddafi’s newer weaponry fires 40 km. In such situations, amateurs with machine guns and light anti-aircraft guns mounted on their pickup trucks, whether brave or not, have little to contribute.

So when the rebels retreat in the face of enemy fire, they retreat fast. When shells start to land within earshot and Gaddafi’s forces appear to be advancing, a line of Toyota Hilux pickup trucks and ordinary passenger cars – Hyundais and Kias and Chevys and ancient Datsuns that barely putter along — pull U-turns and start streaming away from the front.

These are the ragtag rebels: groups of four or five buddies who carpool to the front in their own cars, high-school teachers and high-school dropouts, petroleum engineers and shepherds and bakery owners, packing their own lunches of macaroni and beans, wearing construction helmets and plastic safety goggles for protection, and carrying the Kalashnikovs they managed to buy on Benghazi’s streets.

When the shells start to land, most of these guys leave the fighting to the trained forces who are at the very front lines. There’s not much for them to do anyway. Those at the very front lines, like Al-Sa’iqah, are better equipped, better trained, under organized command, and know what to do in the face of enemy fire. Lacking training, weaponry, and command the ragtag rebels are mostly useless in these situations. There’s no point for them to stick around and risk getting blown up.