The revolutions in the Arab world caught British Prime Minister David Cameron off guard. For some time, diplomats had been planning a trip for Cameron that would take him to several countries in the Middle East. In fact, it was meant to be more of a trade mission, with Cameron’s delegation consisting largely of high-level executives from Great Britain’s weapons industry.

But then came the revolutions in Arab countries and the fighting in Libya. Ignoring them was impossible, and Cameron added a six hour stopover in Cairo to his already tight schedule. It was almost exactly a month ago that he visited Tahrir Square in the center of the city, the focal point of mass demonstration which ultimately forced Egypt’s aging leader, Hosni Mubarak, out of office.
“Meeting the young people and the representatives of the groups in Tahrir Square was genuinely inspiring,” Cameron said. “These are people who have risked a huge amount for what they believe in.”

From Egypt, Cameron flew on to Kuwait, where he got down to the real purpose of his trip: selling weapons to Arab autocrats. When members of parliament back home attacked him for this lack of tact, the prime minister insisted there was nothing wrong with such business transactions and that, in any case, his government made weapons buyers pledge to not use them to violate human rights under any circumstances. Great Britain, he said, has “nothing to be ashamed of.”

Britain, though, has exported over €100 million ($142 million) in weapons to Libyan dictator Moammar Gadhafi in the last two years alone. Included in those shipments are sniper rifles that may currently be in use against the Libyan opposition. Furthermore, Gadhafi’s terror police are British-trained. Indeed, British officials were forced to hastily revoke 50 arms export licenses to Libya and Bahrain.

Cameron now finds himself in a tight spot shared by many Western politicians. Policies that seemed fine prior to the revolutions are now questionable. Regional paradigms are shifting and, at a time when populations are throwing off the yoke of oppression, Realpolitik is a poor guide to Western policy. 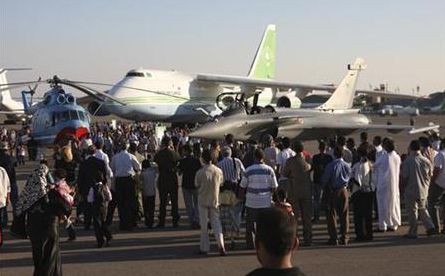 The photograph shows a French Rafale warplane at the Mitiga air base outside Tripoli. A small crowd of men, women and children mill around the fighter, its tail fin lit up by the North African sun.

Taken at an air show in October 2009, the picture is one of several grabbed by military aviation photographers from Dutch website scramble.nl that highlight one of the ironies in the West’s enforcement of a no-fly zone over Libya. To take out Muammar Gaddafi’s air defenses, western powers such as France and Italy are using the very aircraft and weapons that only months ago they were showing off to the Libyan leader. French Rafales like those on show in 2009 flew the western alliance’s very first missions over Libya just over two weeks ago. One of the Rafale’s theoretical targets: Libya’s French-built Mirage jets which Paris had recently agreed to repair.

The Libyan operation also marks the combat debut for the Eurofighter Typhoon, a competitor to the Dassault Rafale built by Britain, Germany, Italy and Spain. An Italian Air Force version of that plane was snapped at the 2009 show hosted by Libyan generals. Two weeks ago, that base – to which arms firms including Dassault returned last November – was attacked by western bombs.

Times change, allegiances shift, but weapons companies will always find takers for their goods. Libya won’t be buying new kit any time soon. But the no-fly zone has become a prime showcase for other potential weapons customers, underlining the power of western combat jets and smart bombs, or reminding potential buyers of the defensive systems needed to repel them.

“This is turning into the best shop window for competing aircraft for years. More even than in Iraq in 2003,” says Francis Tusa, editor of UK-based Defense Analysis. “You are seeing for the first time on an operation the Typhoon and the Rafale up against each other, and both countries want to place an emphasis on exports. France is particularly desperate to sell the Rafale.”

Almost every modern conflict from the Spanish Civil War to Kosovo has served as a test of air power. But the Libyan operation to enforce UN resolution 1973 coincides with a new arms race –a surge of demand in the $60 billion a year global fighter market and the arrival of a new generation of equipment in the air and at sea. For the countries and companies behind those planes and weapons, there’s no better sales tool than real combat. For air forces facing cuts, it is a strike for the value of air power itself.

“As soon as an aircraft or weapon is used on operational deployment, that instantly becomes a major marketing ploy; it becomes ‘proven in combat’,” says a former defense export official with a NATO country, speaking on condition of anonymity about the sensitive subject.

1 thought on “Weapons sales to the Arab world under scrutiny”