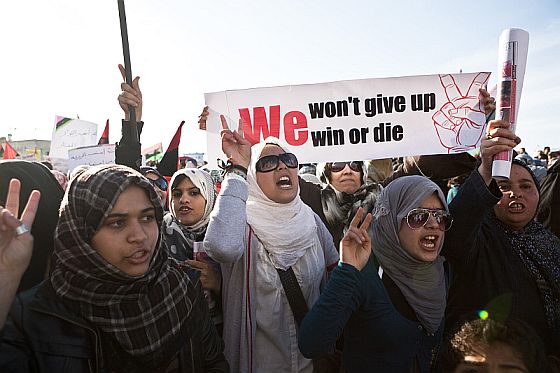 Women in front of the court house in Benghazi demonstrating in favor of a no-fly zone, mid-March, 2011

Whether it’s on the basis of an anti-imperialist narrative or cold-blooded realism, most of the opponents of intervention in Libya have one thing in common: bar those who belong to or a have a direct affiliation with the Gaddafi family, virtually everyone whose been beating this particular antiwar drum is outside and most often many thousands of miles away from Libya.

Stephen Walt, for instance, who writes from the comfort of a tenured chair at Harvard is skeptical about whether, absent Western intervention, bodies were destined to mount up in Benghazi on a scale that could fittingly be termed “mass killings.”

To be clear, I do think rebel lives would have been lost had Qaddafi’s force taken Benghazi, and I have no doubt that the Libyan dictator would have dealt harshly with the rebel leaders and anyone who fought to the bitter end. In other words, I’m pretty sure his forces would have murdered some of the rebels and probably some innocent civilians too. But the [US] president seems to have been convinced that Qaddafi was about to unleash genuine mass killings of perhaps as many as 100,000 people, in a city of roughly 650,000 (remember his pointed reference to Benghazi being nearly the size of Charlotte?). Thus, the president’s rhetoric strongly implied that tens of thousands of innocent bystanders were about to be ruthlessly slaughtered. That same image was reinforced by media references to the “lessons of Rwanda” that supposedly had shaped the views of some of Obama’s advisors.

Yet as I noted in my piece, there were no large-scale massacres in the other cities that the loyalists had recaptured. It is easy to believe that Qaddafi would have gone after the rebel leaders and diehard followers — whom he undoubtedly regards as traitors — but turning Benghazi into a ghost town filled with corpses was probably not in his own interest.

Obviously, one can argue that any substantial loss of life is worth preventing, and that the United States and NATO were justified in intervening even if the number of people at risk was fairly small.

How does one measure a “fairly small” number? I guess Israel’s war on Gaza provides a useful guide since this particular president demonstrated his ability to do no more than monitor the situation as hundreds of civilians — men, women and children, were slaughtered in the days just before Obama was sworn in as president.

If a siege of Benghazi or a direct assault had resulted in 5-10,000 casualties would this have counted in Walt’s mind as “mass killing”? As a reference through which that term might be defined, he cites Final Solutions by Benjamin Valentino, where the author notes: “the intentional slaughter of civilians in the effort to defeat guerrilla insurrgencies was the most common impetus for mass killing in the twentieth century.”

Given that Benghazi is the rebel stronghold, the fact that mass killings did not take place in other towns that Gaddafi’s forces earlier recaptured hardly tells us much about Benghazi’s likely fate in the event that Gaddafi had the opportunity to not merely cut the uprising’s offshoots but to sever its roots.

And having said that, the dehumanizing feature of so many criticisms against intervention has less to do with the fact that some, like Walt’s, rely on an utterly dispassionate realism, than that they are so thoroughly physically and psychologically removed from the experience of individual Libyans. It is no accident that in these arguments there is no Libyan voice.

For that reason, a single vignette from the front line — not the front line on a battle field but the interface through which the outside world and Libyans can connect — can tell us far more about this war than the endless polemics that are intent on telling us what a dreadful mistake this has been.

Ryan Calder provides one such story (and many more).

Last week, during the battle for Ajdabiya, I was sharing a ride from Tobruk to Benghazi with a 25-year-old guy dressed in a green knockoff Adidas soccer jacket with yellow stripes. I struck up a conversation.

“Why are you headed to Benghazi?” I asked.

“I’m stopping in Benghazi for the night and then heading to Ajdabiya,” the young man — I’ll call him Hussein — replied.

“It’s my hometown. Going to fight.” That is, to join the rebel forces.

“Take care of yourself, man,” I said.

“Thanks. What’s your name?”

“My name’s Ryan. I’m from the United States.”

“Oh.” Hussein told me he had four brothers and one sister. Four of the five sons are fighting with the rebels.

“Your mom must be scared,” I said.

Hussein had been studying engineering at a university in Benghazi for a while, but dropped out. “What’s the point?” he said. “All of my friends who had graduated weren’t getting jobs anyway.” To get a proper job — an official one, with a regular salary, he later explained — you need to have been in the army. “And even then,” he went on, “it’s pretty damn hard to get a proper job. You need connections.” Most formal employment is controlled by the state. Otherwise, people work in the informal economy.

Hussein told me he had been involved in the rebellion “from the beginning. I was one of the protesters who started even before February 17” — the revolution’s “official” start date, he said.

“How did you know to join the demonstrations in the first place?” I asked.

“And how’d you get into Bryan Adams and Celine Dion?”

In Benghazi’s central square, nationalist songs celebrating Libyan freedom stream out of large speakers in the tent set up by the University of Garyounis, the largest university in the city. (In Benghazi, as in Cairo and Manama, student groups, women’s activists, professional associations, and other organizations set up tents near the center of the protest action, showing their solidarity with the revolutionary cause.) One clever Shargawi (that’s what you call someone from Benghazi) remixed to a beat a speech by Qaddafi in which the colonel vowed to take Benghazi back from the rebels street by street, house by house, room by room. Titled Zenga zenga, dar dar — “Street by street, room by room” — it has become a pop sensation in liberated Libya.

Yesterday, as we drove through a checkpoint, some rebels on inspection duty asked where we were from. “I’m from the United States,” I said in Arabic. “Yeah, man! I loooove heavy metal,” he responded in English, putting his fingers up and rocking his head back and forth, doing his best Ozzy Osbourne impression.

This morning, one of the fighters I had dinner with in Brega — Khalid, a 39-year-old bakery owner from Benghazi — called me over from the next room.

I drew a blank.

“Listen to this,” Khalid said, punching buttons on his phone. I recognized the opening snare hits and guitar riff immediately. Then the Boss’s voice kicked in. “I was … born in the USA…”

“I love Sabaringasteen,” said Khalid with a broad smile. “And Kenny Rogers. You know Kenny Rogers? Kantaree” — country — “music. I love kantaree music.” Khalid was wearing a red turtleneck and stonewashed jeans. He had a handlebar mustache and a bit of a paunch. It worked — all he needed was a ten-gallon hat.

As I write this, it’s 7 p.m. on March 29, and we’re driving back from Ras Lanuf to Brega. We pass young rebels with Kalashnikovs who had never touched a gun until the revolution, driving their own cars to the front, wearing camo and black-and-white checked kaffiyehs and reflective sunglasses — thawra chic. Groups of them sit by the side of the road, eating dinner. Some have brought along whatever they could find at home for protection: construction helmets, work boots, and even those plastic dive masks you wear to go snorkeling. Toyota Hilux pickup trucks zoom past, carrying Russian-made artillery pieces older than I am. This is what a 21st-century volunteer army looks like. These guys are all heart, not much coordination, and no training whatsoever.

To the north, in the stone’s throw between us and the Mediterranean, rises an orange gas flare from the Ras Lanuf Oil and Gas Processing Company. Here, from the Sirt Plain, come most of the 1.6 million barrels of oil that Libya produces each day. (Or at least, that was the figure before the revolution; it’s much lower now.) Behind us lie the gutted, burned-out shells of Qaddafi’s tanks and supply vehicles.

We pass a yellow road sign with a camel symbol on it. Camel crossing.

Muhammad, the driver, slips a CD into the stereo. The rapper Akon comes on. “You’re so beautiful… I wanna get with youuuuuu…”

3 thoughts on “Where’s the best view of Benghazi?”