The moral philosopher Cornel West, if Barack Obama’s ascent to power was a morality play, would be the voice of conscience. Rahm Emanuel, a cynical product of the Chicago political machine, would be Satan. Emanuel in the first scene of the play would dangle power, privilege, fame and money before Obama. West would warn Obama that the quality of a life is defined by its moral commitment, that his legacy will be determined by his willingness to defy the cruel assault by the corporate state and the financial elite against the poor and working men and women, and that justice must never be sacrificed on the altar of power. 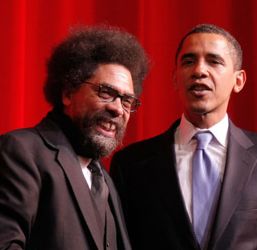 Perhaps there was never much of a struggle in Obama’s heart. Perhaps West only provided a moral veneer. Perhaps the dark heart of Emanuel was always the dark heart of Obama. Only Obama knows. But we know how the play ends. West is banished like honest Kent in “King Lear.” Emanuel and immoral mediocrities from Lawrence Summers to Timothy Geithner to Robert Gates—think of Goneril and Regan in the Shakespearean tragedy—take power. We lose. And Obama becomes an obedient servant of the corporate elite in exchange for the hollow trappings of authority.

No one grasps this tragic descent better than West, who did 65 campaign events for Obama, believed in the potential for change and was encouraged by the populist rhetoric of the Obama campaign. He now nurses, like many others who placed their faith in Obama, the anguish of the deceived, manipulated and betrayed. He bitterly describes Obama as “a black mascot of Wall Street oligarchs and a black puppet of corporate plutocrats. And now he has become head of the American killing machine and is proud of it.”

“When you look at a society you look at it through the lens of the least of these, the weak and the vulnerable; you are committed to loving them first, not exclusively, but first, and therefore giving them priority,” says West, the Class of 1943 University Professor of African American Studies and Religion at Princeton University. “And even at this moment, when the empire is in deep decline, the culture is in deep decay, the political system is broken, where nearly everyone is up for sale, you say all I have is the subversive memory of those who came before, personal integrity, trying to live a decent life, and a willingness to live and die for the love of folk who are catching hell. This means civil disobedience, going to jail, supporting progressive forums of social unrest if they in fact awaken the conscience, whatever conscience is left, of the nation. And that’s where I find myself now.

“I have to take some responsibility,” he admits of his support for Obama as we sit in his book-lined office. “I could have been reading into it more than was there.

“I was thinking maybe he has at least some progressive populist instincts that could become more manifest after the cautious policies of being a senator and working with [Sen. Joe] Lieberman as his mentor,” he says. “But it became very clear when I looked at the neoliberal economic team. The first announcement of Summers and Geithner I went ballistic. I said, ‘Oh, my God, I have really been misled at a very deep level.’ And the same is true for Dennis Ross and the other neo-imperial elites. I said, ‘I have been thoroughly misled, all this populist language is just a facade. I was under the impression that he might bring in the voices of brother Joseph Stiglitz and brother Paul Krugman. I figured, OK, given the structure of constraints of the capitalist democratic procedure that’s probably the best he could do. But at least he would have some voices concerned about working people, dealing with issues of jobs and downsizing and banks, some semblance of democratic accountability for Wall Street oligarchs and corporate plutocrats who are just running amuck. I was completely wrong.”

1 thought on “The Obama deception: Why Cornel West went ballistic”