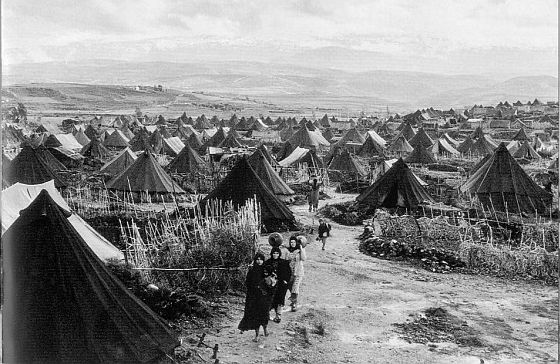 A refugee crisis that has lasted for 63 years following the ethnic cleansing of Palestine in 1948.

Why did thousands of Palestinians yesterday converge upon Israel’s borders? Partly because Syria’s war-criminal leader, Bashar al-Assad, and his ally, Hezbollah, wanted them to. But there’s more to it than that. Palestinians also marched from Jordan and Egypt, whose governments did their best to stop the protests. In fact, they marched from every corner of the Palestinian world, in a tech-savvy, coordinated campaign. What hit Israel yesterday was the Palestinian version of the Arab spring.

Something fundamental has changed. I grew up believing that we—Americans and Jews—were the shapers of history in the Middle East. We created reality; others watched, baffled, paralyzed, afraid. In 1989, Americans gloated as the Soviet Union, our former rival for Middle Eastern supremacy, retreated ignominiously from the region. When Saddam Hussein tried to challenge us from within, we thrashed him in the Gulf War. Throughout the 1990s, we sent our economists, law professors and investment bankers to try to teach the Arabs globalization, which back then meant copying us. In a thousand ways, sometimes gently, sometimes brutally, we sent the message: We make the rules; you play by them.

For Jews, this sense of being history’s masters was even more intoxicating. For millennia, we had been acted upon. Mere decades earlier, American Jews had watched, trembling and inarticulate, as European Jews were destroyed. But it was that very impotence that made possible the triumph of Zionism, a movement aimed at snatching history’s reins from gentiles, and perhaps even God. Beginning in the early 20th century, Zionists created facts on the ground. Sometimes the great powers applauded; sometimes they condemned, but acre by acre, Jews seized control of their fate. As David Ben-Gurion liked to say, “Our future does not depend on what gentiles say but on what Jews do.” The Arabs reacted with fury, occasional violence, and in Palestine, a national movement of their own. But they could rarely compete, either politically or militarily. We went from strength to strength; they never missed an opportunity to miss an opportunity.

That world is gone. America and Israel are no longer driving history in the Middle East; for the first time in a long time, Arabs are. In Tahrir Square, Egypt’s young made a revolution. President Obama bowed to reality and helped show Hosni Mubarak the door; Benjamin Netanyahu stood athwart history, impotently yelling stop. Now Egypt’s leaders are doing its people’s will, bringing Hamas and Fatah together in preparation for elections. Hamas and Fatah are complying because they fear their own Tahrir Square. They sense that in Palestine too, a populist uprising stirs; that’s part of what yesterday’s marches were about. For American and Israeli leaders accustomed to Palestinian autocrats and Palestinian terrorists, this is something new. Netanyahu and his American backers are demanding that Obama rewind the clock, but he can’t. The Palestinians no longer listen to functionaries like George Mitchell. They have lost faith in American promises, and they no longer fear American threats. Instead, they are putting aside their internal divisions and creating facts on the ground.

At least 353 people were injured, one of them critically, when Egyptian security forces attacked a pro-Palestine demonstration outside the Israeli embassy in Cairo on Sunday night, according to witnesses and the Health Ministry.

Activists told Al Jazeera that army and internal security troops used tear gas, rubber-coated bullets and live ammunition to disperse thousands of protesters who had gathered to mark the 63rd anniversary of the “Nakba” or “catastrophe” – the day in 1948 that Israel declared its independence and thousands of Palestinians fled or were expelled form their homes.

At least two protesters were shot by live ammunition, while others were hospitalised after inhaling tear gas or being hit by rubber-coated steel bullets, some of which penetrated the skin, witnesses said.

1 thought on “A Palestinian awakening and an Israeli nightmare”