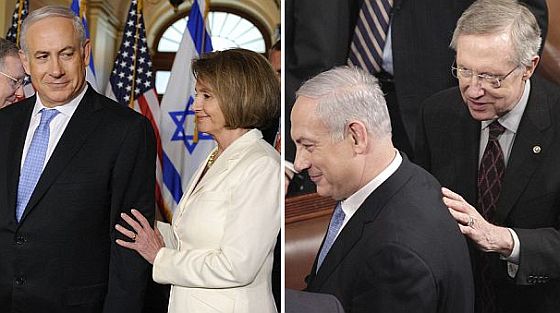 Gliding down the aisle of the House of Representatives like a popular president about to deliver the State of the Union address, escorted by a phalanx of dozens of ebullient Members of Congress, Israeli Prime Minister Benjamin Netanyahu entered a joint meeting of Congress today to a round of hearty handshakes and a thunderous standing ovation.

In a post-speech press conference, Senate Majority Leader Harry Reid gushed that Netanyahu delivered an “all-star” address, and Netanyahu proclaimed it a “great day” for Israel. And, in the self-contained world that is Capitol Hill, who could blame them for believing it to be so?

For in a world in which Israel finds itself as isolated as ever by a growing and successful Palestinian civil society-led international movement of boycott, divestment, and sanctions (BDS) against its apartheid policies; in which Palestinians are taking matters into their own hands diplomatically and pushing to have the United Nations admit the State of Palestine as a full member of the organization this fall; and in which even the President of the United States appears disgruntled by Israel’s intransigent ongoing colonization of Palestinian land, at least on Capitol Hill, Netanyahu can still play the ace up his sleeve to aplomb and then chum around like the king of the castle.

There on Capitol Hill, Netanyahu still has friends like Senator Chuck Schumer, who told a Jewish radio program that “One of my roles, very important in the United States Senate, is to be a shomer [guard]—to be a or the shomer Yisrael [guard of Israel]. And I will continue to be that with every bone in my body.” With friends like these wrapped around his little finger, no wonder Netanyahu’s forcible denunciations of international law were met with such rapturous approbation by Members of Congress who applauded his rejectionism dozens of times.